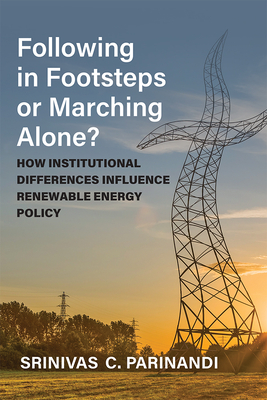 In recent years, the federal government’s increasing inability to address major societal challenges has arguably hampered America’s commitment to renewable energy initiatives. Individual U.S. states have stepped into this void and adopted their own policies, leading some to believe that the states can propel America’s renewable energy industry forward. There is no guarantee, however, that the states will invent their own pioneering policies rather than copy existing templates from each other. Moreover, we know very little about how legislative and regulatory dynamics within America’s states might accelerate or hinder renewable energy policy creation. In Following in Footsteps or Marching Alone?, Srinivas Parinandi explores how the states have devised their own novel policies, and how the political workings of legislatures and public utilities commissions have impacted state renewable energy policy design. Through the meticulous study of nearly three decades of state-level renewable energy policy-making, he finds that their creation is primarily driven by legislatures, and that ideologically liberal legislatures largely push the envelope. To the extent that public utilities commissions craft these policies, they do so with an eye toward avoiding pushback from electric utility companies. The book suggests that a limit of having a predominantly state-driven renewable energy effort can lead to uneven and patchwork-based policy development outcomes, and a possible solution is to try to more successfully federalize these issues. Parinandi urges readers, scholars, and policy practitioners to consider whether a state-led effort is adequate enough to handle the task of building momentum for renewable energy in one of the world’s largest electricity markets.

Srinivas Parinandi is Assistant Professor in Political Science at the University of Colorado at Boulder.

“This book poses a new question in the innovation literature—what predicts invention rather than borrowing—and provides a rigorous test in the important policy realm of renewable energy policy standards. It makes strong contributions to the literatures on state politics, on environmental politics, and on policy innovation.”

“This innovative and exciting book makes a significant intellectual contribution to the study of policy diffusion among the American states. It is engaging, accessible, and extraordinarily compelling.”