Physical Space and Spatiality in Muslim Societies: Notes on the Social Production of Cities (Hardcover) 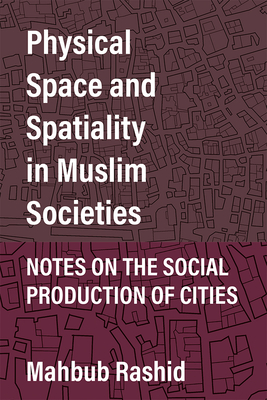 Physical Space and Spatiality in Muslim Societies: Notes on the Social Production of Cities (Hardcover)

Mahbub Rashid embarks on a fascinating journey through urban space in all of its physical and social aspects, using the theories of Foucault, Bourdieu, Lefebvre, and others to explore how consumer capitalism, colonialism, and power disparity consciously shape cities. Using two Muslim cities as case studies, Algiers (Ottoman/French) and Zanzibar (Ottoman/British), Rashid shows how Western perceptions can only view Muslim cities through the lens of colonization—a lens that distorts both physical and social space. Is it possible, he asks, to find a useable urban past in a timeline broken by colonization? He concludes that political economy may be less relevant in premodern cities, that local variation is central to the understanding of power, that cities engage more actively in social reproduction than in production, that the manipulation of space is the exercise of power, that all urban space is a conscious construct and is therefore not inevitable, and that consumer capitalism is taking over everyday life. Ultimately, we reconstruct a present from a fragmented past through local struggles against the homogenizing power of abstract space.

Mahbub Rashid is Interim Dean and Professor in the School of Architecture and Design at the University of Kansas.
“Based on two case studies and following Henri Lefebvre and Pierre Bourdieu, this book contributes architectural sociology, urban and spatial sociology, and a theory of social order and society. Mahbub Rashid criticizes ‘Western’ spatial categories and architectural colonialist politics from a distinct Muslim point of view and living.”
—Heike Delitz, University Bamberg, Germany
— Heike Delitz

“To help us understand the physical structure of urban space, how it comes about and how it functions, Rashid weaves connections between three narratives: absorbing multidimensional descriptions of the cities of Algiers and Zanzibar; a penetrating inquiry into the patterns of knowledge, institutional practice and everyday habits by which they were built and inhabited; a critical analysis of urban transformations associated with colonialism. Architects, urban designers and planners working to produce cities that enrich human life will find that this book revitalizes the relationship between the design imagination, the reflective knowledge which underpins it, and the underlying urban culture from which they both spring, and which, at their best, they also enhance.”
—John Peponis, Professor of Architecture, Georgia Institute of Technology

“In this magnificent volume, Mahbub Rashid offers a novel lens to analyze the complex relationship between spatiality and physical space in pre-modern cities of the Islamic world. By weaving together a tapestry of case studies from the Islamic world—too often overlooked in contemporary literature—Rashid’s work gives new insight into the relationships between physical space, society, and the city at both macro- and micro-level scales. These findings are richly illustrated through Rashid’s application of morphological methodologies to narrate the story of the real people and the social production of domestic space which—importantly—go beyond colonial and orientalist narratives. Complemented by timely and in-depth discussions on race, religion, and social relationships, Mahbub’s multifaceted research sheds light on the complexities of spatiality, urbanism, and urban development in the Islamic world while using Bourdieu, Foucault, and Lefebvre to enrich our understanding of the social production of space. To anyone interested in the history of the built environment, there is much to gain from and appreciate in this fresh and engaging volume.”
—Mohammad Gharipour, Morgan State University

"Rashid offers a tour de force on the social (re)production of cities, Muslim cities in particular. ... A must read for anyone interested in the dialectics of space and society, it will be appreciated by scholars of urban studies, geography, urban sociology, and critical theory. Highly recommended."
—CHOICE
— T.Niazi