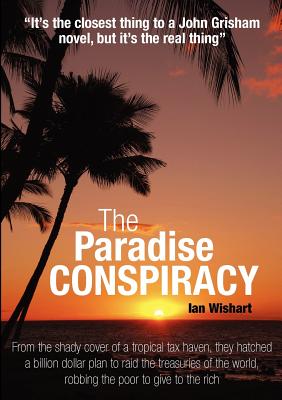 
Not On Our Shelves—Ships in 1-5 Days
(This book cannot be returned.)
A death, missing computer disks, a winebox full of secret files, a tax haven, alleged extortion, arms dealing, corruption, coverups and criminal fraud, billion dollar deals, kidnap attempts, espionage, secret military operations, death threats, break-ins, a maverick politician...and an investigative television team's battle to expose the truth Follow The Paradise Conspiracy on a journey to a country you never knew existed, that politicians would still have you believe doesn't exist, a place one diplomat called 'a dirty little country'. Using a New Zealand Government bank as their flagship, they sailed the seas of global high finance under a tax haven's Jolly Roger, their victims the taxpayers of an unsuspecting world. This is the story they spent two years and a million dollars trying to muzzle, but the biggest secrets are about to be told. The Paradise Conspiracy - the explosive true narrative behind the winebox investigation that embroiled New Zealand, Australia, the US, Japan, the UK and tax havens across the planet - from the award-winning journalist who cracked the winebox code - it doesn't read like a tax story, it reads like a crime story. --- The Paradise Conspiracy by Ian Wishart was a #1 bestseller in its home market and quickly spread around the world, notching up 40,000 copy sales and inspiring a movie, 'Spooked' WHAT THE CRITICS SAY: "It is the closest thing to a John Grisham novel, but it is the real thing" - Waikato Times "A Watergate-type tale" - NZ Listener magazine "Sensational stuff and hard to fault. Wishart is a professional" - The Republican.