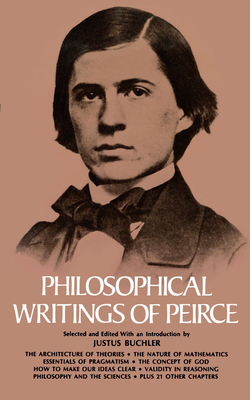 
Not On Our Shelves—Ships in 1-5 Days
(This book cannot be returned.)
An excellent, discerning introduction. It should prove a real boon to the student of Peirce. -- The Modern Schoolman
Charles S. Peirce was a thinker of great originality and power. Although unpublished in his lifetime, he was recognized as an equal by such men as William James and John Dewey and, since his death in 1914, has come to the forefront of American philosophy. This volume, prepared by the Johnsonian Professor of Philosophy at Columbia University, formerly chairman of Columbia's philosophy department, is a carefully balanced exposition of Peirce's complete philosophical system as set forth in his own writings.
The 28 chapters, in which appropriate sections of Peirce's work are interwoven into a brilliant selection that reveals his essential ideas, cover epistemology, phenomenology, cosmology, and scientific method, with especially interesting material on logic as the theory of signs, pure chance vs, pure law in the universe, symbolic logic, common sense, pragmatism (of which he was the founder), and ethics.
Justus Buchler is author of Charles Peirce's Empiricism (1939), Philosophy: An Introduction (with J. H. Randall, Jr., 1942), and more recently, a series of books which form an ongoing philosophic structure: Toward a General Theory of Human Judgement (1951), Nature and Judgment (1855), and The Concept of Method (1961). It has been said of these volumes, A fresh and vital system of ideas has been introduced into the world of contemporary philosophy. (Journal of Philosophy).
It is a very signal advantage to have this collection of Peirce's most important work within the covers of a single substantial volume. We should all be very grateful to Mr. Buchler. -- John Laird, Philosophy