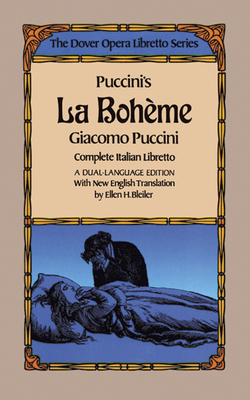 Next to Verdi's A da, Giacomo Puccini's La Boh me is the most popular opera ever written. Performances of A da, La Boh me, Carmen, and Don Giovanni -- the four operas most often performed -- constitute approximately 75 percent of the yearly schedule of operas throughout the world.
This volume contains everything the opera goer needs to derive full satisfaction from La Boh me except the musical score itself. Most important, it provides the complete text of the Italian libretto, just as it is actually sung; that is, where a singer repeats a phrase several times, each of the repetitions is given here. And facing the Italian text is a completely new translation of the libretto into modern, idiomatic English.
In addition to the libretto and English translation, this edition provides a careful, concise summary of the plot of La Boh me and a complete list of the opera's characters. There is also a brief, highly informative introduction by the translator that traces Puccini's masterpiece back to its source in Henry Murger's autobiographical novel La Vie Boh me, illuminating the early history of the opera and its later development.
Opera lovers can use this book with their own recordings of the opera, read it before attending a performance, or can easily take it along to the performance itself. Those who have regretted the lack of a good, authentic, readable edition of the Italian libretto of La Boh me, and have complained of the stodginess of existing English translations, will recognize in this book a first-rate aid to the understanding of one of Puccini's most celebrated operas.

Italian composer Giacomo Puccini (1858-1924) created La Boheme, Madama Butterfly, Turandot, Tosca, and other beloved operas. He was the most popular opera composer in the world at the time of his death, and his works remain standards of the repertoire.