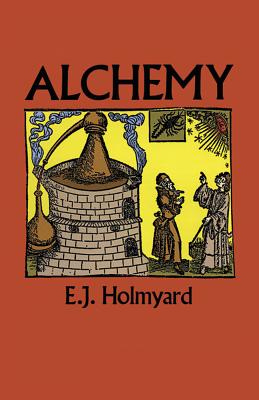 Alchemy is thought to have originated over 2000 years ago in Hellenic Egypt, the result of three converging streams: Greek philosophy, Egyptian technology and the mysticism of Middle Eastern religions. Its heyday was from about 800 A.D. to the middle of the seventeenth century, and its practitioners ranged from kings, popes, and emperors to minor clergy, parish clerks, smiths, dyers, and tinkers. Even such accomplished men as Roger Bacon, Thomas Aquinas, Sir Thomas Browne and Isaac Newton took an interest in alchemical matters.
In its search for the Philosopher's Stone that would transmute base metals into silver and gold, alchemy took on many philosophical, religious and mystical overtones. These and many other facets of alchemy are explored with enormous insight and erudition in this classic work. E. J. Holmyard, a noted scholar in the field, begins with the alchemists of ancient Greece and China and goes on to discuss alchemical apparatus, Islamic and early Western alchemy; signs, symbols, and secret terms; Paracelsus; English, Scottish and French alchemists; Helvetius, Price, and Semler, and much more.
Ranging over two millennia of alchemical history, Mr. Holmyard shows how, like astrology and witchcraft, alchemy was an integral part of the pre-scientific moral order, arousing the cupidity of princes, the blind fear of mobs and the intellectual curiosity of learned men. Eventually, however, with the advent and ascension of the scientific method, the hopes and ideas of the alchemists faded to the status of pseudo-science. That transformation, as well as alchemy's undeniable role as a precursor of modern chemistry, are brilliantly illuminated in this book. Students of alchemy, chemistry, the history of science, and the occult, plus anyone interested in the origin and evolution of one of mankind's most enduring and influential myths, will want to have a copy of this masterly study.