Wulf the Saxon: A Story of the Norman Conquest (Dover Children's Classics) (Paperback) 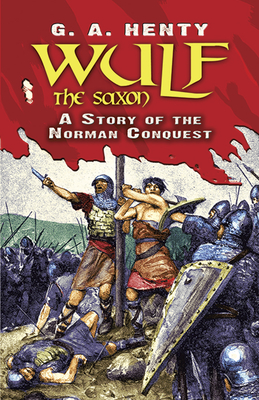 Wulf the Saxon: A Story of the Norman Conquest (Dover Children's Classics) (Paperback)


Not On Our Shelves—Ships in 1-5 Days
(This book cannot be returned.)
Return to the days of the Norman invasion of England and fight alongside a nobleman serving the last of England's Anglo-Saxon monarchs. Wulf of Steyning, a Saxon thane loyal to King Harold Godwinson, boldly captures a castle in the Welsh wars, risks his life to rescue his shipwrecked sovereign, and combats Norsemen at the Battle of Stamford Bridge. Wulf and his comrades resolutely stand by King Harold in a series of adventures that climax at the Battle of Hastings.
Generations of readers have thrilled to this tale of loyalty and courage in eleventh-century Britain and Normandy. Author G. A. Henty created it in conjunction with his popular series of storybooks in which young characters, inspired by their encounters with real-life figures, perform heroic deeds. Historical fiction at its very best, Wulf the Saxon offers boys and girls an exciting adventure in the medieval world.
G. A. Henty (1832-1902) penned a series of immensely popular works of juvenile historical fiction. Many of his books center on a fictional character who interacts with famous people of the era.