The Red Sea Scrolls: How Ancient Papyri Reveal the Secrets of the Pyramids (Hardcover) 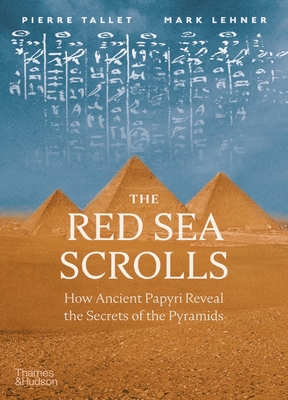 The Red Sea Scrolls: How Ancient Papyri Reveal the Secrets of the Pyramids (Hardcover)

The inside story, told by excavators of the extraordinary discovery of the world’s oldest papyri, revealing how Egyptian King Khufu’s men built the Great Pyramid at Giza.

Pierre Tallet’s discovery of the Red Sea Scrolls—the world’s oldest surviving written documents—in 2013 was one of the most remarkable moments in the history of Egyptology. These papyri, written some 4,600 years ago, and combined with Mark Lehner’s research, changed what we thought we knew about the building of the Great Pyramid at Giza.

Here, for the first time, the world-renowned Egyptologists Tallet and Lehner give us the definitive account of this astounding discovery. The story begins with Tallet’s hunt for hieroglyphic rock inscriptions in the Sinai Peninsula and leads up to the discovery of the papyri, the diary of Inspector Merer, who oversaw workers in the reign of Pharaoh Khufu in Wadi el-Jarf, the site of an ancient harbor on the Red Sea. The translation of the papyri reveals how the stones of the Great Pyramid ended up in Giza. Combined with Lehner’s excavations of the harbor at the pyramid construction site the Red Sea Papyri have greatly advanced our understanding of how the ancient Egyptians were able to build monuments that survive to this day.

Tallet and Lehner narrate this thrilling discovery and explore how the building of the pyramids helped create a unified state, propelling Egyptian civilization forward. This lavishly illustrated book captures the excitement and significance of these seminal findings, conveying above all how astonishing it is to discover a contemporary eyewitness testimony to the creation of the only remaining Wonder of the Ancient World.

Mark Lehner is president of Ancient Egypt Research Associates and research associate at the Oriental Institute of the University of Chicago. He has conducted fieldwork at Giza for over forty years. He is the author of the bestselling The Complete Pyramids and the definitive volume on the subject, Giza and the Pyramids.

Pierre Tallet is a professor of Egyptology at the Sorbonne and president of the French Society of Egyptology. He is the leader of the archaeological mission at Wadi el-Jarf, where he discovered the Red Sea Papyri.