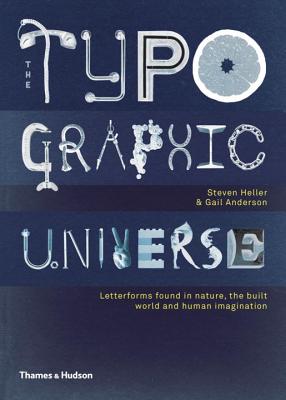 A celebration of the world of letters found or created in unexpected places: natural, artificial, and urban alike

Even non-graphic designers know that type is everywhere: fonts and typefaces fill everything we consume or inhabit. They communicate, inform, sell, explain . . . and yet finding serendipitous letterforms in the least likely locations can also excite and inspire. Once experienced, it is impossible not to see letters in anything from forests to housing projects, from leaves to brickwork. The eye becomes accustomed to seeing a world built of letters.

Unlike most books on typography that present the “best” and most refined examples, the object here is to reveal the "lost" or "unseen" typographies in nature and our cities. From machine-made and sculptural forms to flora and fauna, from the fading ghost types on buildings from a pre-digital age to the subterranean forms found beneath our urban centers, from crowd-sourced creations to the popular vernacular, there is a universe of letterforms all around us.

Steven Heller is co-chair of the MFA Design: Designer as Author program at the School of Visual Arts, New York. His many previous books include
Typographic Universe, New Modernist Type, and Scripts.

Gail Anderson is creative director of design at SpotCo, New York, and a former senior art director of Rolling Stone magazine.
The typefaces here are of the unexpected variety—some almost create a feeling of witnessing a magic trick in how they conjure letters where you thought there were none.
— Fast Co.DESIGN

Will provide a different source of inspiration, and breathe new life into your own design projects.
— Print