The Celtic Myths that Shape the Way We Think (Hardcover) 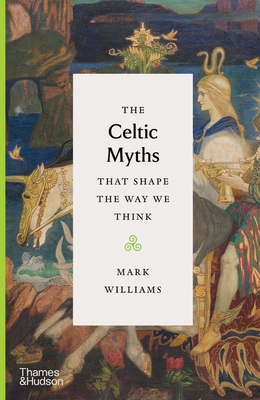 The Celtic Myths that Shape the Way We Think (Hardcover)

A fresh and revealing look at the stories at the heart of Celtic mythology, exploring their cultural impact throughout history up to the present day.

The Celtic Myths That Shape the Way We Think explores a fascinating question: how do myths that were deeply embedded in the customs and beliefs of their original culture find themselves retold and reinterpreted across the world, centuries or even millennia later? Focusing on the myths that have had the greatest cultural impact, Mark Williams reveals the lasting influence of Celtic mythology, from medieval literature to the modern fantasy genre. An elegantly written retelling, Williams captures the splendor of the original myths while also delving deeper into the history of their meanings, offering readers an intelligent and engaging take on these powerful stories.

Beautiful illustrations of the artworks these myths have inspired over the centuries are presented in a color plates section and in black and white within the text. Ten chapters recount the myths and explore the lasting influence of legendary figures, including King Arthur, the Celtic figure who paradoxically became the archetypal English national hero; the Irish and Scottish hero Finn MacCool, who as “Fingal” caught the imagination of Napoleon Bonaparte, Johann Wolfgang von Goethe, and Felix Mendelssohn; and the Welsh mythical figure Blodeuwedd, magically created from flowers of the oak, who inspired W. B. Yeats. Williams’s mythological expertise and captivating writing style make this volume essential reading for anyone seeking a greater appreciation of the myths that have shaped our artistic and literary canons and continue to inspire today.

Mark Williams is an associate professor of global medieval literature at the University of Oxford and the author of Ireland’s Immortals: A History of the Gods of Irish Myth. He writes with “extraordinary erudition and devastating wit”(New York Review of Books).
This is simply the best concise work on
its subject, for a student or general
reader, yet published. The author is not
only expert in the original texts but has a
profound understanding of how they
have been used ever since: and so why
they matter.
— Ronald Hutton, author of The Witch and Pagan Britain and professor of history, University of Bristol