The Greek Myths that Shape the Way We Think (Hardcover) 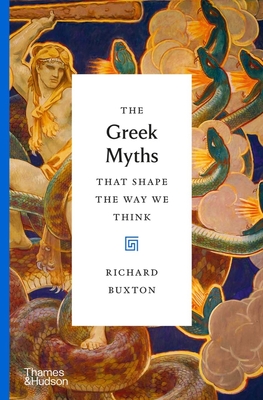 The Greek Myths that Shape the Way We Think (Hardcover)

A fresh and revealing look at the stories at the heart of Greek mythology, exploring their cultural impact throughout history up to the present day.

How do ancient Greek myths find themselves retold and reinterpreted in cultures across the world, several millennia later? In this volume, bestselling author Richard Buxton explores the power that eight iconic Greek myths hold in the modern world. Buxton traces these stories and archetypes from their ancient forms through their transformations over time in literature, art, cinema, psychology, and politics.

As Buxton explains, each of the eight featured myths is fundamental to the way we think about ourselves and the world. The figure of Prometheus has inspired science fiction icons from Mary Shelley to Ridley Scott. The tragedy of Medea has had a profound impact on theater, feminism, and even criminology. Oedipus’s influence stretches far beyond Freud. The rich visual tradition inspired by Greek myths—from pottery to paintings to popular culture —illustrates this wide-ranging, sometimes surprising study, making this book a beautiful object to own as well as a thought-provoking read.

Richard Buxton has been researching and writing about Greek myths for over forty years. He is an emeritus professor of classics at the University of Bristol; author of numerous books, including The Complete World of Greek Mythology and Myths and Tragedies in their Ancient Greek Contexts; and coauthor of Cyclops: The Myth and Its Cultural History.
A stunning survey and a convincing argument for myths’ continuing ability to speak to us, this masterly and insightful work should inspire students and general readers alike.
— Library Journal (starred review)