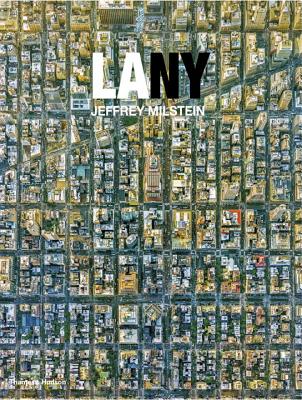 A unique dual aerial portrait of Los Angeles and New York, in a stunning case of compare and contrast from a bird’s-eye point of view

LA NY is a dazzling visual tale of two cities, Los Angeles and New York, as seen from the air. Photographed straight down at a ninety-degree angle to emphasize the particular patterns of place, how the urban grid adapts to local topography, and how the topography itself adapts to human purposes, these two cities are revealed as never before in astonishing detail. Photographer Jeffrey Milstein explores residential and commercial neighborhoods, parks and recreation spots, as well as industrial districts and the infrastructure of transportation. Iconic buildings and landmarks are easy to spot, alongside suburban housing developments, apartment complexes, commercial hubs, entertainment and financial centers, and airports and shipping terminals. Milstein’s work deftly combines architecture, science, and art.

Using high-resolution cameras mounted to a stabilizing gyro, Milstein leaned out of helicopters over Los Angeles where he grew up and over New York where he now lives, looking for shapes and patterns of culture from above, continually awed by the difference an aerial view makes. In addition to the urban topography, events and activities have also been captured, such as the Macy’s Thanksgiving Day Parade and outings at the beach.

Jeffrey Milstein’s work has been published in numerous publications, including CNN Money, the Daily Mail, Elle Décor, Esquire, Fortune, Time, the Los Angeles Times, the San Francisco Chronicle, and Wired. His work can be seen at LACMA, the Smithsonian Institution, George Eastman House, and the Akron Art Museum. He lives in Woodstock, New York.

Jay Maisel is an American photographer.

Owen Hopkins is an architectural writer and curator.