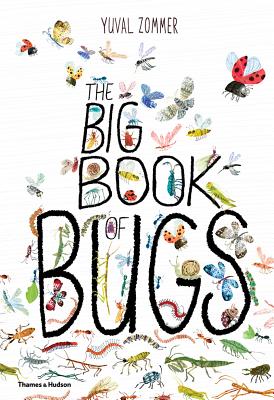 A beautifully illustrated, informative book for children introducing them to bugs that creep, crawl, bite, fly, and more

From moths and beetles to worms and spiders, the world is crawling with fascinating bugs. The Big Book of Bugs is the first fact-filled book for children to explore the vast array of creepy-crawlies that share our Earth.

In the first pages, children learn that bugs live nearly everywhere on the planet and gain tips on how to become a young bug spotter. As the book continues, the scenic compositions on each page are dedicated to key groups of bugs, including beetles, moths, butterflies, bees, snails, crickets, grasshoppers, worms, and spiders. Some spreads approach the world of bugs thematically, such as bugs that come out at night, baby bugs, and life cycles, how bugs hide and show off, and how some bugs love to live in your home. The conversational, funny text is also full of facts that will astonish children and adults, and accompanied by Yuval Zommer’s colorful illustrations.

Yuval Zommer is an award-winning and best-selling author, illustrator, and environmentalist based in London. He studied at the Royal College of Art and worked for many years as a creative director at leading advertising agencies before becoming an author and illustrator. Titles in his Big Book series have been worldwide bestsellers, with over 1.6 million copies in print across thirty-one languages.
This giant, splendidly illustrated book of bugs will have children reaching for a magnifying glass instead of that fly swatter. Bugs have never looked better than in Zommer's colorful, often comical little portraits and glorious natural backdrops, from gardens to ponds. Each artfully composed, oversized spread teems with life and mini-bug dramas, and the brief text is fun and accessible. By the end, two-legged whippersnappers will be convinced that bugs are not only intriguing and marvelous, but useful and deserving of respect.
— Shelf Awareness

A handsome introduction to tiny, oft-overlooked creatures… Seek-and-find prompts invite eagle-eyed readers to identify bugs either by appearance or behavior. Most spreads are devoted to specific creatures; later pages explore how bugs grow, where they can be found, and some of the ecological roles they play.
— Publishers Weekly

An interactive book that will engage and entertain readers while they learn a few basic bug facts… Whimsically illustrated bugs with big eyes crawl, fly, dig, and swoop across the pages in great detail.
— School Library Journal