The Golem of Paris (A Detective Jacob Lev Novel) (Paperback) 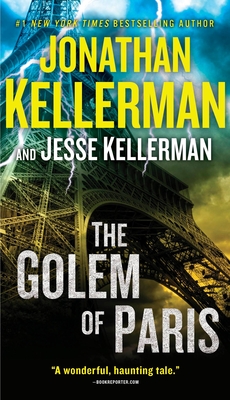 The Golem of Paris (A Detective Jacob Lev Novel) (Paperback)


Special Order—Subject to Availability
From two #1 bestselling masters of crime fiction comes an extraordinary thriller about family, murder, and secrets.

It’s been more than a year since LAPD detective Jacob Lev learned the remarkable truth about his family, and he’s not coping well. He’s back to drinking, the LAPD Special Projects Department continues to shadow him, and the memory of a woman named Mai haunts him. And while Jacob has tried to build a bridge to his mother, she remains imprisoned inside her own tattered mind. Then he comes across the file for a gruesome unsolved murder that brings the two halves of his life into startling collision. Finding the killer will take him halfway around the world, to Paris. It’s a dangerous search for truth that plunges him into the past. And for Jacob Lev, there is no place more frightening.
Jonathan Kellerman is one of the world’s most popular authors, with more than three dozen New York Times–bestselling crime novels, most recently Motive and The Murderer’s Daughter. He has won the Goldwyn, Edgar, and Anthony Awards, and has been nominated for the Shamus Award. Jonathan and his wife, bestselling novelist Faye Kellerman, live in California, New Mexico, and New York.

Jesse Kellerman won the Princess Grace Award for best young American playwright and is the author of Sunstroke, Trouble, The Genius (for which he won the 2010 Grand Prix des Lectrices de Elle), The Executor, and Potboiler (for which he was nominated for the Edgar Award for Best Novel). He lives in California.
Praise for The Golem of Paris

“A compelling mix of adventure, crime, and horror with paranormal and historical elements. The Golem of Paris is a fascinating and frightening glimpse into an imagined religious supernatural subcult [as well as] an engaging crime-solving tale.”—Kirkus Reviews

“I don’t know how one might define ‘magic’ in the literary sense, but I can give you an example of it: The Golem of Paris. It is ostensibly a mystery, but it slides across genre boundaries—romance, supernatural, historical, liturgical- and obliterates them. It is a wonderful, haunting tale...Read, wonder, and enjoy for yourself.”—Bookreporter.com