What Are the Ten Commandments? (What Was?) (Paperback) 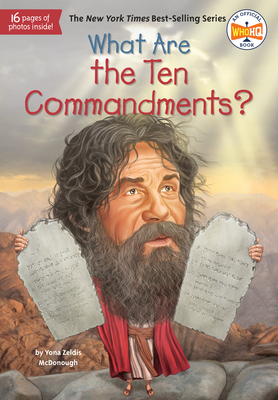 What Are the Ten Commandments? (What Was?) (Paperback)


Special Order—Subject to Availability
Learn the story behind the ten laws that have been the guiding light of Judeo-Christian belief.

Not just about Moses, whose origin story leaves open questions, this book looks back at the time when the commandments were written, how the belief in one all-powerful God set the Israelites apart from other ancient peoples, and the roles the Ten Commandments have played in Judaism, Christianity, and Islam. It also looks at what each individual commandment means and how together they form the basis of leading a moral life as well as forming a just government.
Yona Zeldis McDonough is the author of What Was the Underground Railroad?, Who Was Rosa Parks?, Who Was John F. Kennedy?, Who Was Louis Armstrong?, Who Was Wolfgang Amadeus Mozart?, and Who Was Harriet Tubman?