Choosing War: The Lost Chance for Peace and the Escalation of War in Vietnam (Paperback) 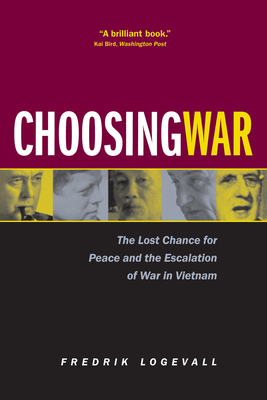 Choosing War: The Lost Chance for Peace and the Escalation of War in Vietnam (Paperback)


Not On Our Shelves—Ships in 1-5 Days
In one of the most detailed and powerfully argued books published on American intervention in Vietnam, Fredrik Logevall examines the last great unanswered question on the war: Could the tragedy have been averted? His answer: a resounding yes. Challenging the prevailing myth that the outbreak of large-scale fighting in 1965 was essentially unavoidable, Choosing War argues that the Vietnam War was unnecessary, not merely in hindsight but in the context of its time.

Why, then, did major war break out? Logevall shows it was partly because of the timidity of the key opponents of U.S. involvement, and partly because of the staunch opposition of the Kennedy and Johnson administrations to early negotiations. His superlative account shows that U.S. officials chose war over disengagement despite deep doubts about the war's prospects and about Vietnam's importance to U.S. security and over the opposition of important voices in the Congress, in the press, and in the world community. They did so because of concerns about credibility—not so much America's or the Democratic party's credibility, but their own personal credibility.

Based on six years of painstaking research, this book is the first to place American policymaking on Vietnam in 1963-65 in its wider international context using multiarchival sources, many of them recently declassified. Here we see for the first time how the war played in the key world capitals—not merely in Washington, Saigon, and Hanoi, but also in Paris and London, in Tokyo and Ottawa, in Moscow and Beijing.

Choosing War is a powerful and devastating account of fear, favor, and hypocrisy at the highest echelons of American government, a book that will change forever our understanding of the tragedy that was the Vietnam War.
Fredrik Logevall is Associate Professor of History at the University of California, Santa Barbara.