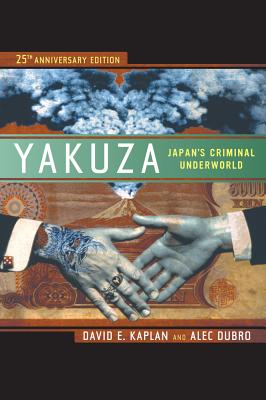 
Not On Our Shelves—Ships in 1-5 Days
Known for their striking full-body tattoos and severed fingertips, Japan's gangsters comprise a criminal class eighty thousand strong--more than four times the size of the American mafia. Despite their criminal nature, the yakuza are accepted by fellow Japanese to a degree guaranteed to shock most Westerners. Yakuza is the first book to reveal the extraordinary reach of Japan's Mafia. Originally published in 1986, it was so controversial in Japan that it could not be published there for five years. But in the west it has long served as the standard reference on Japanese organized crime and has inspired novels, screenplays, and criminal investigations. This twenty-fifth anniversary edition tells the full story or Japan's remarkable crime syndicates, from their feudal start as bands of medieval outlaws to their emergence as billion-dollar investors in real estate, big business, art, and more.
David E. Kaplan is an investigative journalist based in Washington. He is former director of the International Consortium of Investigative Journalists, and served as chief investigative correspondent for U.S. News & World Report. He is the author of Fires of the Dragon and coauthor of The Cult at the End of the World, on the doomsday sect that released nerve gas in the Tokyo subway. Alec Dubro lives and works in Washington, DC where he writes, edits, and blogs for the labor movement. He is the creator of the satirical website, The Washington Pox (www.dcpox.com) and is past president of The National Writers Union.