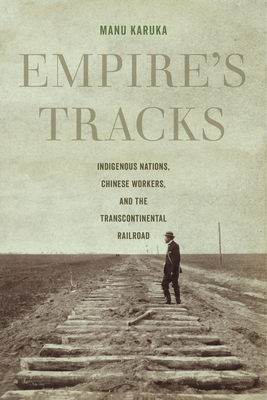 
Not On Our Shelves—Ships in 1-5 Days
Empire’s Tracks boldly reframes the history of the transcontinental railroad from the perspectives of the Cheyenne, Lakota, and Pawnee Native American tribes, and the Chinese migrants who toiled on its path. In this meticulously researched book, Manu Karuka situates the railroad within the violent global histories of colonialism and capitalism. Through an examination of legislative, military, and business records, Karuka deftly explains the imperial foundations of U.S. political economy. Tracing the shared paths of Indigenous and Asian American histories, this multisited interdisciplinary study connects military occupation to exclusionary border policies, a linked chain spanning the heart of U.S. imperialism. This highly original and beautifully wrought book unveils how the transcontinental railroad laid the tracks of the U.S. Empire.

Manu Karuka is Assistant Professor of American Studies at Barnard College.
"Empire’s Tracks comes at a critical juncture, which only compounds its appeal. It is a moment where monopolies breathe new life as seemingly benevolent multinational, e-commerce corporations; when oil pipelines continue to cut through North America despite opposition from Indigenous peoples (amongst others); and when threats of mass deportations emanate from the highest political offices. . . .Karuka’s sincere meditation on the historicity of war, finance and countersovereignty is deeply welcomed as it sensitises readers to the tragically unexceptional reality of the present."
— LSE Review of Books

"A timely and provocative book, creating new ideas with which to re-examine the well-worn story of the railroad."
— Society & Space

".Empire’s Tracks is impressive in its complexity, ambition, and ability to intertwine multiple processes in nineteenth-century continental history. Karuka concludes with a meditation on present-day U.S. imperialism and a call for Indigenous, feminist modes of decolonization: an urgent project with deep roots in Indigenous histories, cultures, and economies. Historians would do well to pay close attention."
— Western Historical Quarterly

"This is an impressive piece of scholarship. While Karuka’s argument that US imperialism predates 1898 is not new, his sophisticated interdisciplinary approach sheds new light on the historical intersection of capitalism and imperialism. It will prompt readers to think critically about historical interpretation and responsibility, and the future consequences of our exploitative political economy."
— Journal of Cultural Economy

"Empire’s Tracks powerfully and effectively portrays how US countersovereignty uses the railroad to stop the unraveling of its own claims to land and space through an unceasing campaign of extirpation and violence. Its contributions to critiques of settler colonialism and racial capitalism are substantial and are sure to be influential in years to come."
— Lateral: Journal of the Cultural Studies Association

"Challenges existing scholarship and fields of study in profound ways. He transforms what, on its surface, appears to be a national American story into one of international, imperialist, and colonial history by reading contingency against assumed outcomes; decentering national creation myths; and foregrounding alternative Indigenous, Chinese, and other voices. In this, Karuka offers a case study for scholars of diplomatic history or international relations to turn inward to national histories they might otherwise overlook and consider new ways of bringing their expertise to seemingly domestic stories."
— H-Net

"This fascinating, sophisticated book on the transcontinental railroad will produce more critical thinking on the part of readers than any railroad history they have ever read. Manu Karuka exposes the pageant of American exploration, expansion, engineering, and entrepreneurship as an imperialist project fueled by disturbing historical processes—Indigenous land expropriation, immigrant labor exploitation, and a “war-finance nexus”—but mythologized for a century thereafter as national destiny and Yankee ingenuity."
— Journal of Arizona History

"Empire’s Tracks is impressive in its complexity, ambition, and ability to intertwine multiple processes in nineteenth-century continental history."

"Empire’s Tracks serves as an invitation to recontextualize colonial narratives within the silences and erasures inherent in these narratives, uncovering and decolonizing communities of knowledge and relationship through the careful study of archives, rumors, oral histories, literary representations, maps, and collective memories."
— Great Plains Quarterly

"Karuka’s account refuses the more familiar liberal historiography of American exceptionalism that promises freedom through liberal democracy and progress through capitalist development, and in doing so, the author advances a number of bold arguments."
— Native American and Indigenous Studies