Age of Coexistence: The Ecumenical Frame and the Making of the Modern Arab World (Paperback) 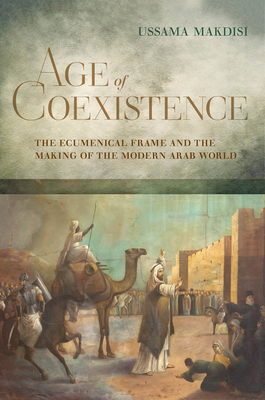 Age of Coexistence: The Ecumenical Frame and the Making of the Modern Arab World (Paperback)


In Stock—Click for Locations
"Flawless . . . [Makdisi] reminds us of the critical declarations of secularism which existed in the history of the Middle East."—Robert Fisk, The Independent

Today's headlines paint the Middle East as a collection of war-torn countries and extremist groups consumed by sectarian rage. Ussama Makdisi's Age of Coexistence reveals a hidden and hopeful story that counters this clichéd portrayal. It shows how a region rich with ethnic and religious diversity created a modern culture of coexistence amid Ottoman reformation, European colonialism, and the emergence of nationalism.

Moving from the nineteenth century to the present, this groundbreaking book explores, without denial or equivocation, the politics of pluralism during the Ottoman Empire and in the post-Ottoman Arab world. Rather than judging the Arab world as a place of age-old sectarian animosities, Age of Coexistence describes the forging of a complex system of coexistence, what Makdisi calls the "ecumenical frame." He argues that new forms of antisectarian politics, and some of the most important examples of Muslim-Christian political collaboration, crystallized to make and define the modern Arab world.

Despite massive challenges and setbacks, and despite the persistence of colonialism and authoritarianism, this framework for coexistence has endured for nearly a century. It is a reminder that religious diversity does not automatically lead to sectarianism. Instead, as Makdisi demonstrates, people of different faiths, but not necessarily of different political outlooks, have consistently tried to build modern societies that transcend religious and sectarian differences.
Ussama Makdisi is Professor of History and the first Arab-American Educational Foundation Chair of Arab Studies at Rice University. He is author of The Culture of Sectarianism, Artillery of Heaven, and Faith Misplaced.
"This book is a must read for anyone interested in the Middle East’s present and who might be hopeful for the region’s future."
— Middle East Journal

"Seeking to counter contemporary perceptions of the Middle East as a region riven by sectarian strife, Makdisi examines the ‘culture of coexistence’ which he believes prevailed in the Ottoman Empire and in the post-Ottoman Arab world, despite its religious diversity."
— Survival: Global Politics and Strategy

"An outstanding study with insight about the agency of Arab intellectuals, thinkers and people at large who, despite twentieth-century local and global violence, persist in struggling for a better world. This is a must- read for all scholars and students of Middle East and cultural studies."
— Arab Studies Quarterly

"A hugely important corrective to widespread stereotypes about relations between Muslims, Christians and Jews before Israel's creation."
— Peter Beinart

"Beyond the excellent historical work in which Makdisi engages, his profound rewriting of narratives of sectarianism and coexistence will have a great impact on readers’ understanding of the modern Middle East. . . . Offers hope for an existence that does not distinguish between Muslim and non-Muslim or Jew and non-Jew but aims to humanize those who have been seen as inferior."

"One of the salient contributions of the Age of Coexistence is how Makdisi writes a history that the existing scholarship has either taken for granted or failed to critically examine. . . . Indispensable reading for graduate students entering the field of Middle Eastern history."
— Bustan: The Middle East Book Review

"This is clearly an essential book. . . . There are many lessons to learn from this study with regard to how regions and their peoples, their ethno-religious identities, and their politics are approached, investigated, and narrated."
— Journal of Historical Geography