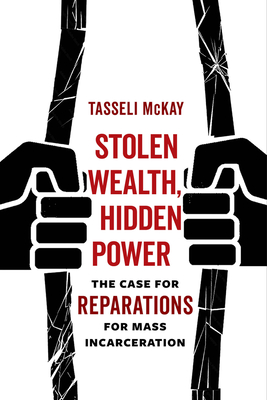 
On Our Shelves Now at:
A meticulous and exhaustive accounting of the total economic devastation wreaked on Black communities by mass incarceration with an action guide for vital reparations.

Stolen Wealth, Hidden Power is a staggering account of the destruction wrought by mass incarceration. Finding that the economic value of the damages to Black individuals, families, and communities totals $7.16 trillion—roughly 86 percent of the current Black–White wealth gap—this compelling and exhaustive analysis puts unprecedented empirical heft behind an urgent call for reparations.

Much of the damage of mass incarceration, Tasseli McKay finds, has been silently absorbed by families and communities of the incarcerated—where it is often compensated for by women’s invisible labor. Four decades of state-sponsored violence have destroyed the health, economic potential, and political power of Black Americans across generations. Grounded in principles of transitional justice that have guided other nations in moving past eras of state violence, Stolen Wealth, Hidden Power presents a comprehensive framework for how to begin intensive individual and institutional reparations. The extent of mass incarceration’s racialized harms, estimated here with new rigor and scope, points to the urgency of this work and the possibilities that lie beyond it.

Tasseli McKay is a National Science Foundation postdoctoral research fellow at Duke University and an affiliate of RTI International. She holds a doctorate in social policy from the London School of Economics and is lead author of Holding On: Family and Fatherhood during Incarceration and Reentry.
"An eloquent and impressively detailed argument for repairing a grave injustice."
— Publishers Weekly