The Accidental History of the U.S. Immigration Courts: War, Fear, and the Roots of Dysfunction (Paperback) 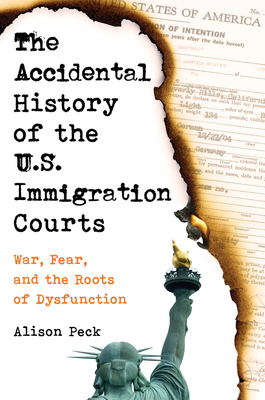 The Accidental History of the U.S. Immigration Courts: War, Fear, and the Roots of Dysfunction (Paperback)


In Stock—Click for Locations
How the immigration courts became part of the nation’s law enforcement agency—and how to reshape them.

Alison Peck's original and surprising account shows how paranoia sparked by World War II and the War on Terror drove the structure of the immigration courts. Focusing on previously unstudied decisions in the Roosevelt and Bush administrations, the narrative laid out in this book divulges both the human tragedy of our current immigration court system and the human crises that led to its creation. Moving the reader from understanding to action, Alison Peck offers a lens through which to evaluate contemporary bills and proposals to reform our immigration court system. Peck provides an accessible legal analysis of recent events to make the case for independent immigration courts, proposing that the courts be moved into an independent, Article I court system. As long as the immigration courts remain under the authority of the attorney general, the administration of immigration justice will remain a game of political football—with people’s very lives on the line.

Alison Peck is Professor of Law and Codirector of the Immigration Law Clinic at West Virginia University College of Law.
"An eye-opening look at how the history and structure of U.S. immigration courts contribute to present-day problems. . . . Supported with lucid legal analysis and incisive historical details, this is a persuasive call for change."
— Publishers Weekly

"Sometimes there are books that leave you much better for the experience. This is one of them. . . .  Alison Peck has filled a major gap, setting out a roadmap toward possible legislative alternatives to this unsatisfactory arrangement by offering the Title I Tax Court as a better option. If this is to happen, it will almost certainly have to be as a function of comprehensive immigration reform, a tantalizing oasis in the current political desert. If that happens, I will listen to her very carefully, as I did here."
— Southwestern Historical Quarterly