Church Wealth in Mexico: A Study of the 'Juzgado de Capellanias' in the Archbishopric of Mexico 1800 1856 (Cambridge Latin American Studies #2) (Paperback) 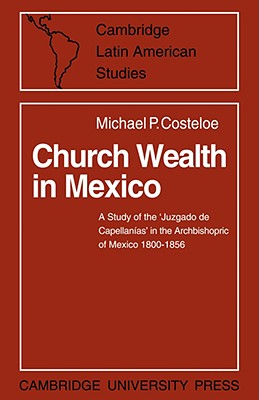 Church Wealth in Mexico: A Study of the 'Juzgado de Capellanias' in the Archbishopric of Mexico 1800 1856 (Cambridge Latin American Studies #2) (Paperback)

This is book number 2 in the Cambridge Latin American Studies series.

The Juzgado de Capellanias was the most important fiscal institution within the Roman Catholic Church in Mexico. It operated in each diocese as a type of bank, receiving clerical revenues from various sources and investing them by way of loans at interest. The Roman Catholic Church in Mexico was both a cause and a victim of the political and economic chaos of this period. The liberals alleged that the concentration of much of the country's wealth in the hands of the clerical corporations hindered the political and economic progress of the nation. The clergy argued that they utilized much of their property and capital to the direct benefit of both society and the economy. Dr Costeloe examines these different views in relation to the Juzgado in Mexico. He discusses its complex internal administration, skilled employees, sources of revenue and the procedure for obtaining loans from it. Since the borrower was obliged to guarantee repayment of his loan by offering a property as security, the Church, through the Juzgado as creditor, gained control of the mortgaged property. Dr Costeloe analyses the effects of this investment and subsequent control of real estate via the clergy. In the final section, the author discusses the relations between the Juzgado and the State.