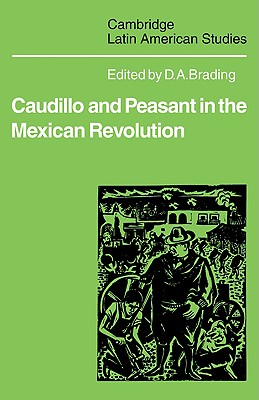 This is book number 38 in the Cambridge Latin American Studies series.

Until quite recently, the Mexican Revolution was usually defined as an agrarian movement, as a peasant war, with Emiliano Zapata, leader of the villagers of Morelos, taken as its most typical figure. Yet this interpretation leaves many questions unanswered. It ignores the sheer diversity in both regional background and social goals of the revolutionary forces. It does not explain why the partition of the great estates and effective land distribution was delayed until the 1930s, almost two decades after the cessation of hostilities. More important, it fails to account for the emergence of a one party political system, in which the resources of the state are concentrated on industrialization and economic growth. This book consists of case-studies and general perspectives, all based on research, which follow the careers of several caudillos, some conservative, some progressive, with the aim of analysing the means by which these revolutionary chieftains first obtained power and then promoted or opposed the authority of the national state.