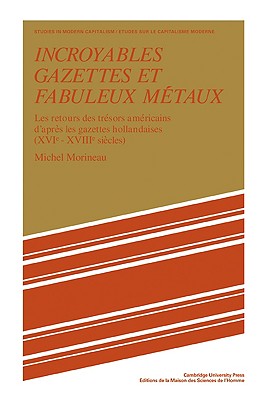 
Not On Our Shelves—Ships in 1-5 Days
(This book cannot be returned.)
The discovery of America was followed by the discovery of her silver and gold. Year after year these precious metals were mined and sent to Spain and to Portugal and from there throughout the world. From the beginning of the sixteenth century, historians and economists have accorded great importance to these movements of treasure. The whole of European economic development has been linked to them by way of increases in prices (the quantitative theory). Nevertheless prior to this work, no exhaustive documentation of the actual volumes transferred was undertaken: the well-known work of E. J. Hamilton covers only a part of the period; that of Soetbeer is imprecise and out of date. The primary object of this book, written in French, is thus to establish complete and reliable statistics. Morineau has finally located these in the Dutch gazettes, faithful observers of the Spanish Carerra. His reconstruction of actual movements has led him to question many widely accepted hypotheses and concepts.