Allende's Chile: The Political Economy of the Rise and Fall of the Unidad Popular (Cambridge Latin American Studies #25) (Paperback) 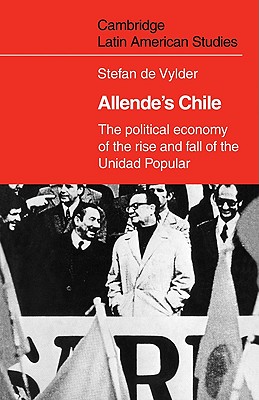 Allende's Chile: The Political Economy of the Rise and Fall of the Unidad Popular (Cambridge Latin American Studies #25) (Paperback)


Not On Our Shelves—Ships in 1-5 Days
(This book cannot be returned.)
The evolution of events in Chile during the presidency of the late Salvador Allende attracted attention all over the world. The experiment was unique in that no other Marxist president had been put in power by the democratic process of the ballot box. Political and economic developments under the government of the Unidad Popular undoubtedly had significance beyond the Chilean borders. The 'Chilean road to socialism' was a blind alley, leading not to socialism by peaceful means but to a military dictatorship by exceedingly violent means. Allende and the Unidad Popular were defeated and Chilean democracy was overthrown. But why it was overthrown remains an important question. This study analyzes the economic aspects of Allende's failure.