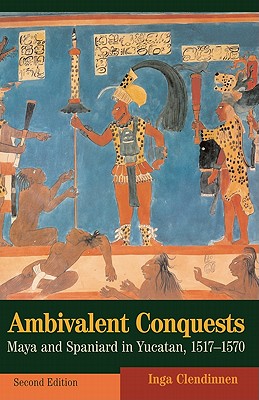 
Not On Our Shelves—Ships in 1-5 Days
(This book cannot be returned.)
In what is both a specific study of conversion in a corner of the Spanish Empire and a work with implications for the understanding of European domination and native resistance throughout the colonial world, Inga Clendinnen explores the intensifying conflict between competing and increasingly divergent Spanish visions of Yucatan and its destructive outcomes. In Ambivalent Conquests Clendinnen penetrates the thinking and feeling of the Mayan Indians in a detailed reconstruction of their assessment of the intruders. This new edition contains a preface by the author where she reflects upon the book's contribution in the past fifteen years. Inga Clendinnen is Emeritus scholar, LaTrobe University, Australia. Her books include the acclaimed Reading the Holocaust (Cambridge, 1999), named a Best Book of the Year by the New York Times Book Review, and Aztec: An Interpretation (Cambridge, 1995), and Tiger's Eye: A Memoir (Scribner, 2001).