How to Talk Monster (Hardcover) 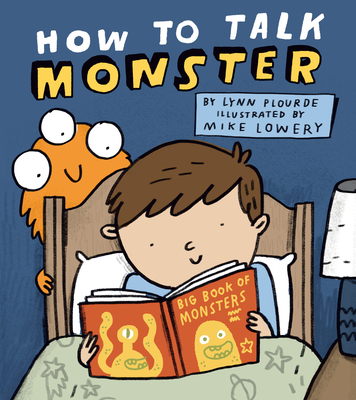 How to Talk Monster (Hardcover)


In Stock—Click for Locations
A whimsical and giggle-inducing exploration of what might happen when a monster visits at bedtime from award-winning children's author Lynn Plourde and the playful imagination of #1 NYT bestselling illustrator, Mike Lowery.

A Little Boy is just trying to go to sleep when a Little Monster creeps up to his window and . . . says goop-zee-googy! Or, peek-a-boo!, in case you don't speak Monster. Hilarity ensues as the Little Monster tries to play with the Little Boy despite the language barrier. While at first scared, the Little Boy comes to Little Monster's rescue when he gets hurt and the two new friends are able to play together all night long.

Complete with a glossary translating the monster language used throughout, this classic nighttime adventure story will have little readers wishing for a Little Monster to knock on their window at night.
Lynn Plourde is the author of forty children's books, including Wild Child, Maxi's Secrets, and Go, Grandma, Go! She lives on a ridge in rural Maine where she spies deer, wild turkeys, foxes, and porcupines, but she's still waiting to spy her first monster. Meanwhile, she's learning to talk Monster, and zuzzer! It is trickier than the French and German she studied in school.

Mike Lowery is an author and New York Times bestselling illustrator who has worked on dozens of books for kids. Some of his favorites are the Gingerbread Man Is Loose series by Laura Murray and the Everything Awesome series, which he also wrote. He likes to collect weird facts and other bits of knowledge, and he draws them every morning in his sketchbook. He lives in Atlanta with his wife and two kids.
Praise for How to Talk Monster:

“Entertaining. . . A lighthearted take on an unlikely friendship.” —Kirkus Reviews

“A satisfying picture book that will leave you smiling.” —Booklist

“With visual and verbal directness and broad humor that gently tackles themes of assumption and exclusion, Plourde (The Boy Whose Face Froze Like That) and Lowery (Wood Could) capture a special night out—one that may remind readers of their own comics creations.” —Publisher’s Weekly

“The language element is particularly effective in this graphic-novel beginning reader as the monster’s gibberish offers both humor and a playful opportunity for readers to stretch developing literacy skills . . . Lowery’s digital art is amusingly goofy as well as pleasingly breezy, with simple lines and figures and a palette subdued just enough to not detract from the words. Both readers who brave checking under the bed and ’fraidy cats who huddle under the covers will appreciate this tale of fanciful nocturnal fun.” —The Bulletin of the Center for Children’s Books