Hope in Times of Fear: The Resurrection and the Meaning of Easter (Paperback) 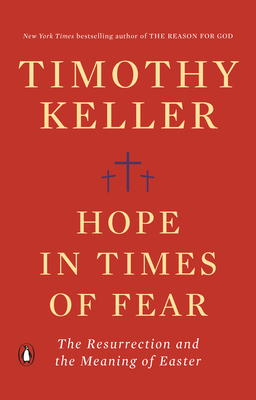 Hope in Times of Fear: The Resurrection and the Meaning of Easter (Paperback)


On Our Shelves Now at:
The Resurrection accounts of Jesus in the Gospels are the most dramatic and impactful stories ever told. One similarity unites each testimony--that none of his most loyal and steadfast followers could "see" it was him, back from the dead. The reason for this is at the very foundation of the Christian faith.

She turned around and saw Jesus standing there, but she did not realize that it was Jesus. (John 20:14)

Hope in the Time of Fear is a book that unlocks the meaning of Jesus's resurrection for readers. Easter is considered the most solemn and important holiday for Christians. It is a time of spiritual rebirth and a time of celebrating the physical rebirth of Jesus after three days in the tomb. For his devoted followers, nothing could prepare them for the moment they met the resurrected Jesus. Each failed to recognize him. All of them physically saw him and yet did not spiritually truly see him. It was only when Jesus reached out and invited them to see who he truly was that their eyes were open. Here the central message of the Christian faith is revealed in a way only Timothy Keller could do it--filled with unshakable belief, piercing insight, and a profound new way to look at a story you think you know. After reading this book, the true meaning of Easter will no longer be unseen.
Timothy Keller was born and raised in Pennsylvania, and educated at Bucknell University, Gordon-Conwell Theological Seminary, and Westminster Theological Seminary. He was first a pastor in Hopewell, Virginia. In 1989 he started Redeemer Presbyterian Church in New York City, with his wife, Kathy, and their three sons. Today, Redeemer has more than five thousand regular Sunday attendees and has helped to start over 250 new churches around the world. Also the author of Every Good Endeavor, The Meaning of Marriage, Generous Justice, Counterfeit Gods, The Prodigal God, Jesus the King, and The Reason for God, Timothy Keller lives in New York City with his family.