Nobody Will Tell You This But Me: A True (As Told to Me) Story (Paperback) 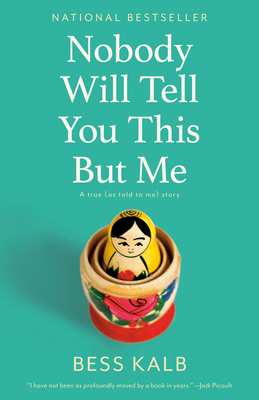 Nobody Will Tell You This But Me: A True (As Told to Me) Story (Paperback)


On Our Shelves Now at:
NATIONAL BESTSELLER

ONE OF THE BEST BOOKS OF THE YEAR:
VOGUE • FORBES • BOOKPAGE • NEW YORK POST • WIRED

“I have not been as profoundly moved by a book in years.” —Jodi Picoult

Even after she left home for Hollywood, Emmy-nominated TV writer Bess Kalb saved every voicemail her grandmother Bobby Bell ever left her. Bobby was a force—irrepressible, glamorous, unapologetically opinionated. Bobby doted on Bess; Bess adored Bobby. Then, at ninety, Bobby died. But in this debut memoir, Bobby is speaking to Bess once more, in a voice as passionate as it ever was in life.

Recounting both family lore and family secrets, Bobby brings us four generations of indomitable women and the men who loved them. There’s Bobby’s mother, who traveled solo from Belarus to America in the 1880s to escape the pogroms, and Bess’s mother, a 1970s rebel who always fought against convention. But it was Bobby and Bess who always had the most powerful bond: Bobby her granddaughter’s fiercest supporter, giving Bess unequivocal love, even if sometimes of the toughest kind. Nobody Will Tell You This But Me marks the creation of a totally new, virtuosic form of memoir: a reconstruction of a beloved grandmother’s words and wisdom to tell her family’s story with equal parts poignancy and hilarity.
Bess Kalb is an Emmy-nominated comedy writer and the bestselling author of Nobody Will Tell You This But Me, a New York Times Editor’s Choice. She wrote for eight years on Jimmy Kimmel Live! and has written for the Emmy Awards, the Academy Awards, and the 2020 Democratic National Convention. She is the head writer and executive producer of the WGA Award-nominated Yearly Departed, an Amazon Comedy Special, and is currently adapting Nobody Will Tell You This But Me into a feature film with Sight Unseen Pictures.
"Kalb has taken the medium of the memoir and thrown all its conventions to the wind; it’s wonderful." —Maggie O'Farrell, Literary Hub

“Tender, funny, fresh and unconventional, Nobody Will Tell You This But Me manages to make something new and wonderful out of a family memoir.” —Susan Orlean

"This book had me howling during the darkest days of the pandemic." —Michelle Ruiz, Vogue

“A poignant and funny look at four generations of women.” —The Washington Post

“A love story that resonates across generations. . . . Original, moving, and funny.” —The Florida Times-Union

“A charming memoir. . . . For everyone who ever had—or wished they had—a Jewish grandmother.” —New York Journal of Books

“A book that gives you a solid cathartic weep and a renewed sense of joy in family ties.” —New York Post

“I have never read anything that feels truer to my experience of having a Jewish grandmother than Nobody Will Tell You This But Me.” —Emily Burack, Hey Alma

“Lively and fascinating, funny yet poignant. . . . Kalb pulls off [a] daring approach brilliantly—in a bold stroke of literary bravura, she has turned the formula for writing memoirs inside out, bringing her grandmother’s distinctive voice back to life and sharing it with a legion of lucky readers. . . . Enthralling.” —BookPage (starred review)