In Praise of Veg: The Ultimate Cookbook for Vegetable Lovers (Hardcover) 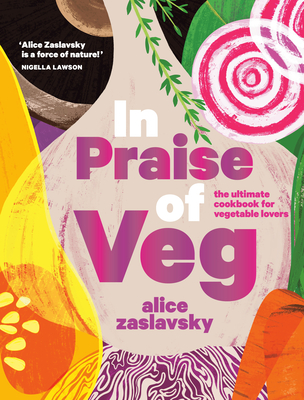 In Praise of Veg: The Ultimate Cookbook for Vegetable Lovers (Hardcover)


In Stock—Click for Locations
"Alice Zaslavsky is a force of nature!" —Nigella Lawson

The only book you’ll ever need on vegetables, with a kaleidoscope of 150+ colorful, innovative recipes for meals of all kinds.

Food writer Alice Zaslavsky has written the definitive guide for everyone—from vegan to carnivore—who is ready to open their kitchen to a world of vegetable possibilities. More than 450 pages detail how to handle any vegetable you might pick up at the farmers' market or store—including a rainbow of more than 150 recipes that put vegetables at the center of the plate.

Uniquely organized by color, this book is filled with countless flavor combinations, rule-of-thumb methods to buy, store, and cook vegetables, recipe shortcuts and tips, and wisdom from more than 50 of the world’s top chefs. In Praise of Veg will help beginners and avid cooks alike turn daily vegetables into easy and delicious meals. This is veg, but not as you know it . . . yet!
ALICE ZASLAVSKY is a cook, writer, vegelante and the friendliest voice in food. She believes that food doesn’t just open mouths, it opens minds too. By helping people find a love of and a confidence with vegetables, she shows that anything is possible in the kitchen—and in life. Born in Tbilisi, Georgia, at the crossroads of Europe, Asia and the Middle East, Alice grew up in Melbourne, Australia, a city known for its bustling blend of cultures and cuisines. Her cooking is reflective of these many influences, a melting pot of ideas and a riotous vibrancy of flavors that vibrates with joy and vitality.

In Praise of Veg is Alice’s second book and has been a smash hit internationally, published in 11 countries and translated into multiple languages. In Australia, it was shortlisted for the Indie Book Awards, the ABDAs and the ABA's Booksellers’ Choice for Adult Nonfiction Book of the Year, and won the coveted title of the Australian Book Industry Awards’ Illustrated Book of the Year. It was awarded a gold medal by the Gastronomic Academy of Germany, and nominated for cookbook of the year in the Netherlands by Food & Friends. In the UK, it was shortlisted for the British Book Design and Production Awards, and was highly commended at the Guild of Food Writers Awards.

Alice’s first book, Alice’s Food A-Z, was selected as a Notable Book at the Children’s Book Council of Australia Awards. Previous to her successful cookbooks, Alice competed on MasterChef Australia, and is now the Culinary Correspondent on Australia’s ABC News and a broadcaster on ABC Radio.

Alice lives on the Mornington Peninsula in Victoria, Australia, with her husband, Nick, and their daughter, Hazel (otherwise known as The Nut).

Praise for the Australian edition of In Praise of Veg

“It truly is a joyful volume, with flavors as bright as its colorful pages.”
—NIGELLA LAWSON, "Cookbook Corner"

"The Stephanie Alexander for the future. The kind of book everyone needs on their shelf."
—MAX BREARLEY, delicious.

"This is the most beautiful book I own."
—EMELIA JACKSON, MasterChef All Australia: Back to Win winner

"The book is a marvel, and dare I say, an instant classic."
—Herald Sun