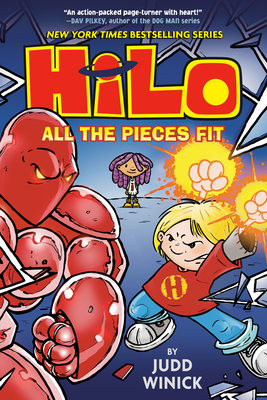 This is book number 6 in the Hilo series.

For five books, Razorwark has chased Hilo through the Universe. Now the chase is over. Find out how the epic war between Razorwark and Hilo ends and get ready to start the next adventure with the New York Times bestselling graphic novel series that kids and critics love!

Being a hero isn't easy. But Hilo had no idea it would be this hard. Hilo came to earth because he was running from Razorwark. But he's done running. Razorwark has come to earth. And the time has come for one final face to face showdown. What happens will decide the fate of the robot world . . . and Hilo's future. The sacrifice will be great. But with Izzy's help, Hilo finally knows what he has to do. Because THIS is how all the pieces fit.

Here's what people (and robots!) are saying about Hilo!

"Every kid would love a pal like HILO, and every kid will love this book!" --Lincoln Peirce, bestselling author of the Big Nate series

"A perfect book for any kid who ever needed a friend and then had one with superpowers fall from space." --Seth Meyers, actor, comedian and writer

"A story that can be enjoyed by the entire family."--The New York Times

* "A must-have."--School Library Journal, Starred Review
JUDD WINICK lives in San Francisco with his wife, their two kids, and their cat. Judd has written bestselling comic book series, including Batman, Green Lantern, Green Arrow, Justice League, and Star Wars. Judd also appeared as a cast member of MTV's The Real World: San Francisco and is the author of the highly acclaimed graphic novel Pedro and Me, about his Real World roommate and friend, AIDS activist Pedro Zamora. Visit Judd and Hilo online at juddspillowfort.com or find him on Twitter at @JuddWinick.