The Moon's Time to Shine (StoryBots) (Step into Reading) (Paperback) 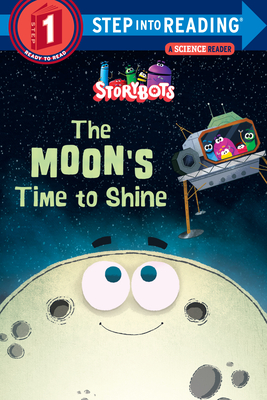 The Moon's Time to Shine (StoryBots) (Step into Reading) (Paperback)


Not On Our Shelves—Ships in 1-5 Days
Just in time for the 50th anniversary of the moon landing! The inquisitive crew from the award-winning StoryBots apps, videos, and Emmy Award-winning Netflix show star in a Step 1 reader that is over the moon!

Children will recognize the signature catchy rhymes and colorful art from the StoryBots' popular YouTube video "The Moon's Time to Shine." They will learn that the moon orbits Earth, that--in spite of glowing brightly--it doesn't make its own light, and more!

Step 1 readers feature big type and easy words for children who know the alphabet and are eager to begin reading. Rhyming text is paired with picture clues to help children decode the story.
Gregg and Evan Spiridellis are brothers and the founders of StoryBots and JibJab Bros. Studios. Their digital media company is dedicated to making award-winning online entertainment and educational content, which has been seen by hundreds of millions of viewers. You can find StoryBots videos, apps, games, and activities on StoryBots.com and YouTube, and you can view Ask the StoryBots on Netflix. JibJab Bros. Studios is based in Venice, California.