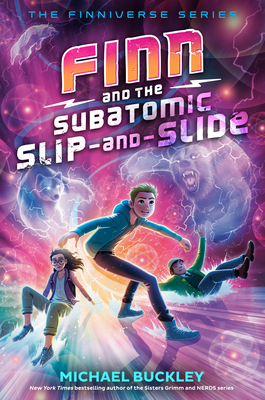 This is book number 3 in the The Finniverse series series.

From the New York Times bestselling author of the Sisters Grimm and NERDS comes the third and final book in the time-jumping, universe-skipping, action-packed middle grade series with equal parts humor and heart!

After his adventures through time, Finn returns home to a world he doesn’t recognize. Changing the past has created an all-new present, one in which he and his friends never vanquished the Plague. Now the giant bugs rule Earth from their spaceship! What’s an intergalactic traveler to do? The answer is obvious. Finn, Lincoln and Julep must defeat the Plague. Again.

But how? Julep and Lincoln don’t remember Finn or their friendships. In fact, they’ve changed just as much as the world itself has, and they want nothing to do with his dangerous plan to save humankind. Finn’s plan? Find his father, Asher Foley, who is trapped on a microscopic world known as the Subatomic. Using a space-age slip-and-slide, Finn and his confused former-friends shrink themselves to enter this strange new world where nothing is as it seems, hoping to find his father, the one man who can put history, and the present, back together.

It won’t be easy. The Subatomic is ruled by an evil menace with an army of hulking robots under his command. Even worse, Finn’s bitterest enemy, the Plague soldier Sin Kraven, is in pursuit. Can Finn find his father, save his friendships, and return to Earth in time to stop the Plague?

"Rousingly raucous."--Kirkus Reviews
MICHAEL BUCKLEY is the New York Times bestselling author of the Sisters Grimm and NERDS series and the cocreator, writer, and executive producer of Cartoon Network's Robotomy. He lives in New York City.