Why We Lost: A General's Inside Account of the Iraq and Afghanistan Wars (Paperback) 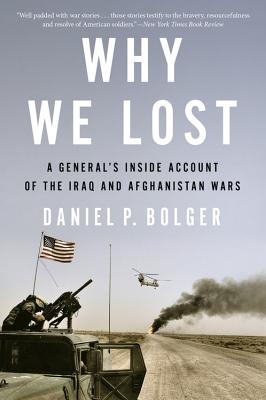 Why We Lost: A General's Inside Account of the Iraq and Afghanistan Wars (Paperback)

A high-ranking general’s gripping, “compelling” insider account of the U.S. wars in Afghanistan and Iraq, and how it all went wrong (Wall Street Journal).

Over his thirty-five year career, Daniel Bolger rose through the ranks of the army infantry to become a three-star general, commanding in both Afghanistan and Iraq. Perhaps more than anyone else, he was witness to the full extent of the wars, from 9/11 to withdrawal from the region. Not only did Bolger participate in top-level planning and strategy meetings, but he also regularly carried a rifle alongside soldiers in combat actions.

Writing with hard-won experience and unflinching honesty, he argues that while we lost in Iraq and Afghanistan, we did not have to. Intelligence was garbled. Key decision makers were blinded by spreadsheets or theories. And we never really understood our enemy. Why We Lost is a timely, forceful, and compulsively readable account of these wars from a fresh and authoritative perspective.

“Why We Lost is neither a memoir nor a window into private meetings and secret discussions. It is . . . filled with heartfelt stories of soldiers and Marines in firefights and close combat. It weighs in mightily to the ongoing debate over how the United States should wage war.” — Washington Post

DANIEL P. BOLGER completed thirty-five years in the U.S. Army, retiring as a lieutenant general in 2013. He graduated from The Citadel and earned his master’s degree and doctorate from the University of Chicago. He commanded the Coalition Military Assistance Training Team in Iraq in 2005–06, 1st Cavalry Division in Baghdad in 2009–10, and NATO Training Mission-Afghanistan in 2011–13. His military awards include five Bronze Star medals (one for valor) and the Combat Action Badge.

“Bolger’s honesty is refreshing…Recounting combat actions in Iraq and Afghanistan, those stories testify to the bravery, resourcefulness and resolve of the American soldiers.” —Andrew J. Bacevich, New York Times Book Review      "Compelling." —Wall Street Journal  "Hard-hitting." —Time   "I am glad to see someone of [Bolger's] caliber tackling this subject." —Tom Ricks, ForeignPolicy.com, author of Fiasco: The American Military Adventure In Iraq  “With vigorous, no-nonsense prose and an impressive clarity of vision, this general does not mince blame in this chronicle of failure.”—Kirkus, starred review  —