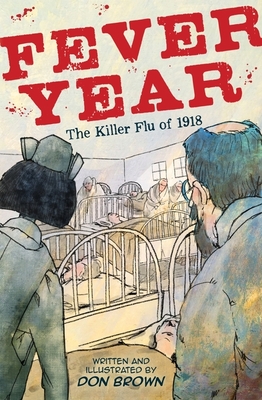 
On Our Shelves Now at:
From the Sibert Honor–winning creator behind The Unwanted and Drowned City comes one of the darkest episodes in American history: the Spanish Influenza epidemic of 1918. This nonfiction graphic novel explores the causes, effects, and lessons learned from a major epidemic in our past, and is the perfect tool for engaging readers of all ages, especially teens and tweens learning from home.

New Year’s Day, 1918. America has declared war on Germany and is gathering troops to fight. But there’s something coming that is deadlier than any war.

When people begin to fall ill, most Americans don’t suspect influenza. The flu is known to be dangerous to the very old, young, or frail. But the Spanish flu is exceptionally violent. Soon, thousands of people succumb. Then tens of thousands . . . hundreds of thousands and more. Graves can’t be dug quickly enough.

What made the influenza of 1918 so exceptionally deadly—and what can modern science help us understand about this tragic episode in history? With a journalist’s discerning eye for facts and an artist’s instinct for true emotion, Sibert Honor recipient Don Brown sets out to answer these questions and more in Fever Year.

"Brown is comics’ premiere chronicler of historical catastrophes."—Booklist   "Brown (Drowned City) matches his economical text with art that skillfully depicts the steadily growing horror."—Publishers Weekly   "[R]eads like a horror story....a gripping real-life drama for youngsters who just like a pulse-pounding read as well as those with historical or scientific leanings."—Bulletin of the Center for Children’s Books​   " —