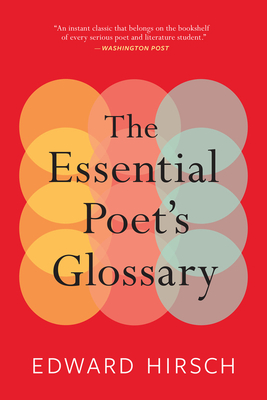 "An instant classic that belongs on the bookshelf of every serious poet and literature student."—Washington Post

Chancellor of the Academy of American Poets Edward Hirsch has compiled poetic terms spanning centuries and continents, including forms, devices, movements, aesthetics, rhetorical terms, and folklore. Knowing how a poem works is crucial to unlocking its meaning—entries will deepen readers’ relationships with their favorite poems and open greater levels of understanding in each new poem they encounter.

Shot through with the enthusiasm, authority, and sheer delight that made A Poet’s Glossary and How to Read a Poem so beloved, this Essential edition is the book that all readers, writers, teachers, and students of poetry will return to again and again.

EDWARD HIRSCH is a celebrated poet and peerless advocate for poetry. A MacArthur fellow, he has published ten books of poems and six books of prose. He has received numerous awards and fellowships, including the National Book Critics Circle Award, a National Endowment for the Arts Fellowship, the Rome Prize, a Pablo Neruda Presidential Medal of Honor, and the American Academy of Arts and Letters Award for literature. He serves as president of the John Simon Guggenheim Memorial Foundation and lives in Brooklyn.