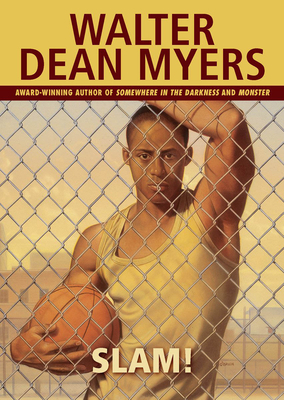 
Not On Our Shelves—Ships in 1-5 Days
An exciting, eye-catching repackage of acclaimed author Walter Dean Myers' bestselling paperbacks, to coincide with the publication of SUNRISE OVER FALLUJA in hardcover.Seventeen-year-old Greg "Slam" Harris can do it all on the basketball court. He's seen ballplayers come and go, and he knows he could be one of the lucky ones. Maybe he'll make it to the top. Or maybe he'll stumble along the way. Slam's grades aren't that hot. And when his teachers jam his troubles in his face, he blows up. Slam never doubted himself on the court until he found himself going one-on-one with his own future, and he didn't have the ball.
The late Walter Dean Myers was the 2012-2013 National Ambassador for Young People's Literature. He was the critically acclaimed New York Times bestselling author of an award-winning body of work which includes Somewhere in the Darkness, Slam!, and Monster. Mr. Myers has received two Newbery Honor medals, five Coretta Scott King Author Book Awards, and three National Book Award Finalist citations. In addition, he was the winner of the first Michael L. Printz Award.