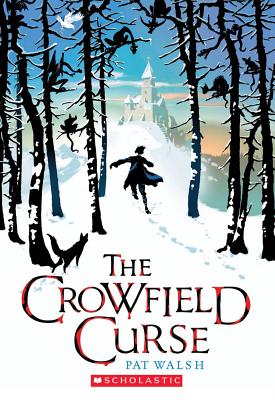 If the deepest secret has been spoken, can the deadliest curse be broken?

Sent into the forest to gather firewood for the medieval abbey where he's an apprentice, Will hears a cry for help, and comes upon a creature no bigger than a cat. Trapped and wounded, it's a hobgoblin, who confesses a horrible secret: Something is buried deep in the snow, just beyond the graveyard. A mythical being, doomed by an ancient curse...

*Includes a timetable of daily life in the abbey, a glossary of monastic terms, and a sneak peek at the chilling sequel THE CROWFIELD DEMON!

Shortlisted for the Branford Boase Award
Pat Walsh is a trained archaeologist as well as an amateur historian, inspired by the rich mythology of Britain. Born in a haunted house in Kent, she now lives in Bedfordshire, England, with her husband and children. THE CROWFIELD DEMON is the sequel to THE CROWFIELD CURSE, her debut novel. Visit her at www.pat-walsh.com.
PRAISE FOR THE CROWFIELD CURSE

*"Suspenseful and spooky. With fascinating attention to detail and an edgy battle between evil and good, Walsh sweeps readers almost effortlessly into another time and place. By the close of the novel, readers are hoping for more, and the ending suggests that more is to come. " -- School Library Journal, starred review

"Walsh writes with a sure and steady hand, deftly blending the historical details of medieval monastery life with the magical elements of the mythical supernatural creatures. The hob, with his unintentional wit and well-timed comic relief, is the true standout of the cast. The growing tension will compel young readers toward the climactic battle in the woods and its terrifying conclusion." -- Bulletin of the Center for Children's Books

*Plus a sneak peek at the sequel THE CROWFIELD DEMON!

A CBC {TK FROM LIBRARY MKTG}

Kirkus "Best Book of the Year"

School Library Journal – September 2010
*WALSH, Pat. The Crowfield Curse. 336p. glossary. Scholastic/Chicken House. Sept. 2010. Tr $16.99. ISBN 978-0-545-22922-7. LC number unavailable.
Gr 5-8–Set in England in the winter of 1347, this suspenseful and spooky story will thrill readers who loved Joseph Delaney's “The Last Apprentice” series (HarperCollins). Fourteen-year-old William, whose family perished in a fire 18 months earlier, works as a servant at the local monastery in exchange for his room and board, meager as it is. While gathering firewood, he discovers a creature caught in a trap and saves its life. The hobgoblin tells him that he can only be seen by those with the Sight, a gift the boy did not know he possessed. As the hob recovers from his wounds, Will encounters a mystery that shakes him to his core. There is an angel secretly buried in the nearby woodlands, and a visitor to the abbey, a leper, is determined to find it. For reasons unclear to the boy, Mr. Bone ins