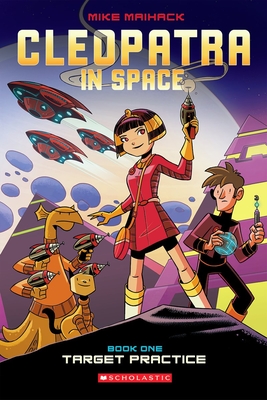 This is book number 1 in the Cleopatra in Space series.

A funny, action-packed graphic novel featuring a young Cleopatra who's transported to the future and learns it's up to her to save the galaxy. Now an animated TV series streaming on Hulu and Peacock!When Cleo finds a mysterious tablet that zaps her to the far, really far future, she learns of an ancient prophecy that says she is destined to save the galaxy from the tyrannical rule of the evil Xaius Octavian. She enrolls in Yasiro Academy, a high-tech school with classes like algebra, biology, and alien languages (which Cleo could do without), and combat training (which is more Cleo's style). With help from her teacher Khensu, Cleo learns what it takes to be a great leader, while trying to figure out how she's going to get her homework done, make friends, and avoid detention!
Mike Maihack is the creator of the Cleopatra in Space series. Book One: Target Practice won a Florida Book Award and was a YALSA Quick Pick for Reluctant Young Adult Readers. He is also the creator of the popular webcomic Cow & Buffalo and has contributed to books like Sensation Comics Featuring Wonder Woman; Parable; Jim Henson's The Storyteller; Cow Boy; Geeks, Girls, and Secret Identities; and Comic Book Tattoo. Mike lives with his wife, two sons, and Siamese cat in Land O' Lakes, Florida. Visit him online at mikemaihack.com.
"Cleo is a fun, fearless heroine -- I'd love to explore the galaxy with her!" --Raina Telgemeier, #1 New York Times bestselling author of SMILE and DRAMA

"Cleo is a fun, fearless heroine -- I'd love to explore the galaxy with her!" --Raina Telgemeier, #1 New York Times bestselling author of SMILE and DRAMA