Down to the Last Out: The Journal of Biddy Owens, the Negro Leagues: Birmingham, Alabama, 1948 (My Name Is America) (Paperback) 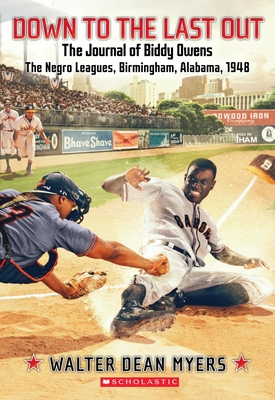 Down to the Last Out: The Journal of Biddy Owens, the Negro Leagues: Birmingham, Alabama, 1948 (My Name Is America) (Paperback)


Not On Our Shelves—Ships in 1-5 Days
Newbery and Coretta Scott King award-winning author Walter Dean Myers's baseball story THE JOURNAL OF BIDDY OWENS is now available in paperback, with an exciting repackaging!Seventeen-year-old Biddy Owens is part of the Birmingham Black Barons baseball team and dreams of becoming a major league baseball player. However, in 1948 most black players can only play for the Negro Leagues. Jackie Robinson has just recently integrated and is playing for the Brooklyn Dodgers, but the white owners are reluctant to add too many blacks to their rosters. The Birmingham Black Barons are some of the best players in the league. But as they travel around playing ball, Biddy realizes that not everyone is ready for blacks and whites to play on the same team. Can Biddy prove he's good enough to be part of the game his loves, no matter what color his skin is?
The late Walter Dean Myers was the 2012-2013 National Ambassador for Young People's Literature. He was the critically acclaimed New York Times bestselling author of an award-winning body of work which includes Somewhere in the Darkness, Slam!, and Monster. Mr. Myers has received two Newbery Honor medals, five Coretta Scott King Author Book Awards, and three National Book Award Finalist citations. In addition, he was the winner of the first Michael L. Printz Award.