Hope for Winter: The True Story of a Remarkable Dolphin Friendship (Paperback) 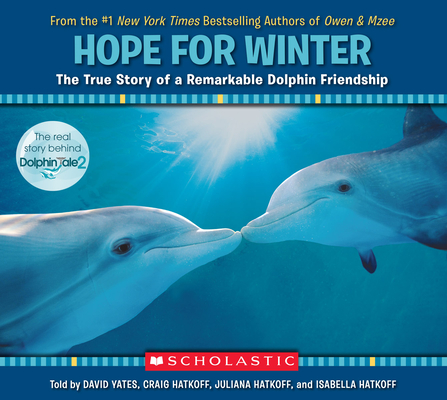 Hope for Winter: The True Story of a Remarkable Dolphin Friendship (Paperback)


Not On Our Shelves—Ships in 1-5 Days
A story of a baby dolphin named Hope is rescued against all odds.Exactly 5 years and 1 day after Winter, the tailless dolphin who inspired a major motion picture featuring Morgan Freeman, Ashley Judd, and Harry Conick Jr., was rescued, something pretty amazing happened. Just miles from where Winter was found, appeared another injured dolphin, orphaned from her mother and struggling to survive. The Clearwater Marine team quickly went to work, attempting to nurse this new dolphin back to health. After a tough fight fought by the little dolphin and by the Clearwater team, the dolphin grew strong and healthy. She now lives with Winter and crowds flock to the aquarium to see them play. Her tale is one of courage and triumph. She was named Hope and this book tells her story.
Craig Hatkoff is the co-founder of the Tribeca Film Festival and of Turtle Pond Publications. Both Owen & Mzee: The True Story of a Remarkable Friendship and Owen & Mzee: The Language of Friendship are New York Times bestsellers. He lives with his wife and their two daughters in Manhattan.
David Yates is the CEO of the Clearwater Marine Aquarium. He initiated a marketing and media plan that shared Winter's amazing story with the world, leading to the major motion picture DOLPHIN TALE, which Yates co-produced. Yates is also a three time Emmy Award winner, producer and writer of the documentary WINTER, THE DOLPHIN THAT CAN, and an executive producer of DOLPHIN TALE 2.