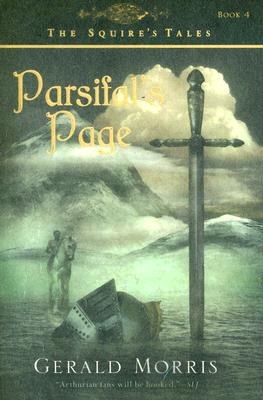 Piers is desperate to become a page to escape the dirty, tedious labor of his father’s blacksmith shop. So when a knight arrives announcing that he’s on “the quest,” Piers begs to go along. Off on a series of adventures he never dreamed possible, Piers and the knight quickly run into difficulties. The knight is slain by Parsifal who is on a quest of his own.

Parsifal is unlike anyone Piers has ever met. He doesn’t behave “knightly” at all. Slowly, Piers realizes that being a knight has nothing to do with shining armor and winning jousts. And, as their journey continues, they find that to achieve their quest they must learn more than knighthood: they must learn about themselves.

The tale of Parsifal has been told more than that of any other knight, but no one has ever told his story quite like Gerald Morris does in his fourth Arthurian novel, another tour de force of humor, action, magic, and, as always, true love.

When Gerald Morris was in fifth grade he loved Greek and Norse mythology and before long was retelling the stories to his younger sister and then to neighborhood kids. He began carrying a notebook in which he kept some of the details related to the different stories. The joy he found in retelling those myths continued when he discovered other stories. According to Gerald Morris, “I never lost my love of retelling the old stories. When I found Arthurian literature, years later, I knew at once that I wanted to retell those grand tales. So I pulled out my notebook . . . I retell the tales, peopling them with characters that I at least find easier to recognize, and let the magic of the Arthurian tradition go where it will.” Gerald Morris lives in Wausau, Wisconsin, with his wife and their three children. In addition to writing he serves as a minister in a church.

"Entertaining . . . Arthurian fans will be hooked by the great writing. " School Library Journal

"Libraries where Morris's Arthurian series has a following will certainly want to add this to their fiction collections." Booklist, ALA —