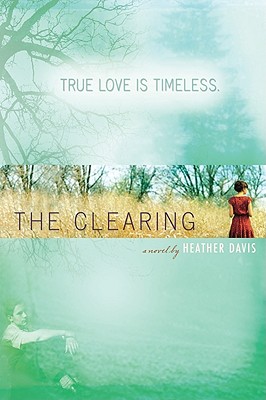 In this bittersweet romance, two teens living decades apart form a bond that will change their lives forever.

Amy is drawn to the misty, mysterious clearing behind her Aunt Mae’s place because it looks like the perfect place to hide from life. A place to block out the pain of her last relationship, to avoid the kids in her new town, to stop dwelling on what her future holds after high school.

Then, she meets a boy lurking in the mist—Henry. Henry is different from any other guy Amy has ever known. And after several meetings in the clearing, she’s starting to fall for him.

But Amy is stunned when she finds out just how different Henry really is. Because on his side of the clearing, it’s still 1944. By some miracle, Henry and his family are stuck in the past, staving off the tragedy that will strike them in the future. Amy’s crossing over to Henry’s side brings him more happiness than he’s ever known—but her presence also threatens to destroy his safe existence.

In The Clearing, author Heather Davis crafts a tender and poignant tale about falling in love, finding strength, and having the courage to make your own destiny—a perfect book to slip into and hide away for awhile.

HEATHER DAVIS is the author of Never Cry Werewolf, Wherever You Go, and The Clearing, which was nominated for a RITA Award for Best Young Adult Romance. She lives in Seattle. Visit her website at www.heatherdavisbooks.com.

"Will have special appeal for female fans of the romance in the Twilight books or Judy Blundell’s What I Saw and How I Lied. . . . Henry's dilemma is especially poignant, and a completely unexpected ending shows that Davis is capable of creating a riveting read that lingers long after the story ends."--Booklist "Alternating between Amy and Henry's intersecting stories, Davis's (Never Cry Werewolf) second novel has a quiet power; the time travel element gives the story the feel of an old-fashioned romance, with a tinge of melodrama. The tale takes some unexpected turns, providing insights into healing and the weight of destiny along the way."--Publishers Weekly
"This will appeal to romance readers that like a touch of the paranormal."--VOYA —