Queen of the Falls (Hardcover) 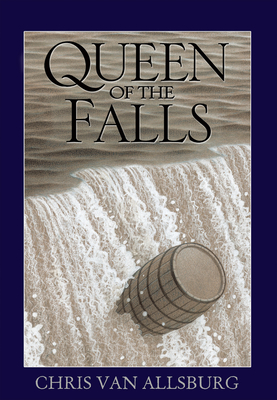 Queen of the Falls (Hardcover)

Come meet the Queen of the Falls and witness with your own eyes her daring ride!

At the turn of the nineteenth century, a retired sixty-two-year-old charm school instructor named Annie Edson Taylor, seeking fame and fortune, decided to do something that no one in the world had ever done before—she would go over Niagara Falls in a wooden barrel.

She could remember standing in a park near the falls, hypnotized by the sight and sound, and holding her father’s hand as they took a walk that would lead them closer. That’s what everyone wonders when they see Niagara . . . How close will their courage let them get to it?

This gorgeous, imaginative picture book is from two-time Caldecott winner Chris Van Allsburg, creator of Jumanji and The Polar Express.

Chris Van Allsburg is the winner of two Caldecott Medals, for Jumanji and The Polar Express, as well as the recipient of a Caldecott Honor Book for The Garden of Abdul Gasazi. The author and illustrator of numerous picture books for children, he has also been awarded the Regina Medal for lifetime achievement in children’s literature. In 1982, Jumanji was nominated for a National Book Award and in 1996, it was made into a popular feature film. Chris Van Allsburg is a former instructor at the Rhode Island School of Design. Visit him at chrisvanallsburg.com.

"Van Allsburg’s foray into nonfiction is filled with the same suspense, surrealism, and menace that have thrilled readers of his fiction."—School Library Journal, starred review

"In this unromantic and bittersweet account, Van Allsburg presents the feat as born as much out of need as of courage, with Taylor portrayed as a hardheaded eccentric and an unlikely queen."—Publishers Weekly, starred review

"A daredevil story is an easy sell for almost any kid audience, and a daredevil story by a beloved storyteller is just about as good as it gets."—The Bulletin of the Center for Children's Books, starred review "An odd, unsettling meditation on fame."—Kirkus Reviews

"This illustrated biography climaxes beautifully with a double-page spread of the great falls, a tiny barrel bobbing in the current, and a powerful one-line text: '"Oh, Lord," she whispered, and then she was gone.'"—The Horn Book —