The Wake Of Forgiveness (Paperback) 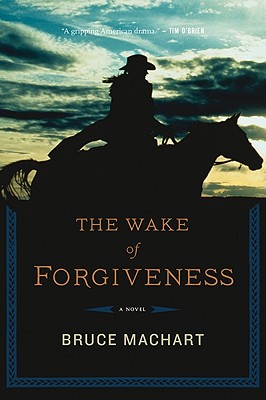 The Wake Of Forgiveness (Paperback)

“Brutal but beautiful, this book held me captive. Machart's writing is so hallowed it works like a salve on the brutality he levels on his characters, the farm animals, and the landscape. Four brothers, raised by a father made mean from a broken heart, are both physically and emotionally damaged by his neglect. The sibling bond is broken apart when three of the four brothers marry and seemingly land well, while the fourth and youngest struggles to reconcile his divergent lifestyle. Ultimately, there is a grace that comes out of all the violence and chaos.”
— Rebecca Fitting, Greenlight Bookstore, Brooklyn, NY

On a moonless Texas night in 1895, an ambitious young landowner suffers the loss of “the only woman he’s ever been fond of” when his wife dies during childbirth with the couple’s fourth son, Karel. The boy is forever haunted by thoughts of the mother he never knew, by the bloodshot blame in his father’s eyes, and permanently marked by the yoke he and his brothers are forced to wear to plow the family fields. From an early age, Karel proves so talented on horseback that his father enlists him to ride in acreage-staked horseraces against his neighbors. In the winter of 1910, Karel rides in the ultimate high-stakes race against a powerful Spanish patriarch and his alluring daughters: hanging in the balance are his father’s fortune, his brothers' futures, and his own fate.

BRUCE MACHART is the author of The Wake of Forgiveness. His fiction has appeared in Zoetrope: All-Story, Glimmer Train, Story, One Story and elsewhere, and has been anthologized in Best Stories of the American West. A graduate of the MFA program at Ohio State University, Machart is Assistant Professor of English at Bridgewater State University, and he lives in Hamilton, Massachusetts.

"A mesmerizing, mythic saga...”—New York Times “In his luminous and wrenching tale of four motherless brothers, Machart skillfully evokes the rural Texas landscape...”—Entertainment Weekly “Bruce Machart has penned a dazzling, gratifying tale of retribution, redemption and morality.”—San Antonio Express News “This is pure literature; an emphasis on language over plot; risky, complex and often unlikable characters and that echo, that ripple that flows forward into the future and backward into myth.”—Los Angeles Times “Such evocative prose helps make Machart's novel a standout this year, in any genre.”—Cleveland Plain Dealer “Machart writes fine idiomatic dialogue and unwinds textured details of farm life, horse racing, and the vagaries of the weather.”—Houston Chronicle “The big state of Texas is home to many good writers, and the arrival of Bruce Machart's debut novel shows there's always room for one more.”—Dallas Morning News "Machart's prose is so evocative that you can smell the men's cheap tobacco and corn mash, feel the bare, hard-packed earth from which they coax crops. Their dialogue, rural south Texas vernacular, is spare, gnarled and often funny. In addition to the violence, betrayals and cruelty of an old-fashioned western, The Wake of Forgiveness also finds redemption ..."--Wall Street Journal

"This intense, fast-paced debut novel is hard to put down. Machart's hard-hitting style is sure to capture fans of Cormac McCarthy and Jim Harrison. We can only hope for more exceptional fiction from this very talented writer. Enthusiastically recommended."--STARRED, LIBRARY JOURNAL "... [an] accomplished debut ... Machart's moving story unfolds lyrically and sensually, with little fanfare, as his thoughtful prose propels a character-driven story about family, morality, and redemption."--STARRED, PUBLISHERS WEEKLY "The Wake of Forgiveness impressed me on many levels. The prose is polished and evocative, the physicality of rural Texas in the year 1910 shimmers with loving exactitude, and the story of Karel Skala is a gripping American drama of misplaced guilt, familial struggle, and a search for identity. At the heart of this remarkable novel is a question that is both age-old and completely modern: Who am I? What a fine, rich, absorbing book." -- Tim O'Brien"If Evan S. Connell, William Faulkner, and Norman Maclean had been born as one person, he might possess the extraordinary gifts of Bruce Machart. The Wake of Forgiveness is a wild, God-forsaken cry delivered in language so lush we cannot stop listening. The dazzling velocity of Machart’s prose bears a tale redemptive and resonant as myth, insistent and intimate as breath in the body. With fierce grace and uncompromising passion, this visionary young writer offers the reader the mercy of his own heart and the capaciousness of mind that makes it possible to love the lost without fear or judgment." --Melanie Rae Thon  "In his richly told novel, The Wake of Forgiveness, Bruce Machart tells a story of fathers and sons that stretches wide across the Texas landscape, leaving behind its own beautiful wake of remembrance , inheritance, and the unbreakable bonds of family."--Hannah Tinti
—