Smoke from This Altar (Hardcover) 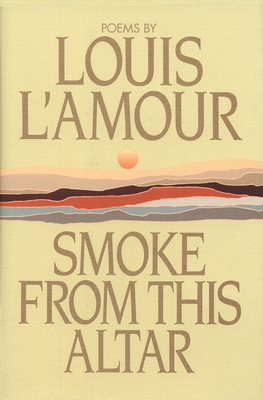 Smoke from This Altar (Hardcover)


Backordered
Smoke From This Altar, a book that has become legendary among Louis L'Amour readers, is the very first book L'Amour ever published. It appeared, to great critical praise, for sale only in Oklahoma bookstores more than fifty years ago. Since then it has become the most sought-after L'Amour title of all, with the few circulating copies from the small print run commanding top dollar from rare book collectors. Now, at last, it is being published nationally in this beautiful keepsake Bantam edition.

It was in Smoke From This Altar that L'Amour first gave public voice to his now-celebrated spirit of wanderlust. Like the short stories in his classic, million-copy-selling Yondering, and his best-selling memoir Education of a Wandering Man, the poems in this book are inspired by his experiences and memories of his journeys across oceans and continents. It is vintage L'Amour storytelling--in verse--about nature, the land, and the people who loved and braved it.

Smoke From This Altar begins with a newly written introduction by his wife Kathy in which she discusses the special place this work has held in the L'Amours' lives. In concludes with twenty previously uncollected L'Amour poems selected by his family.

Impassioned, adventurous, heroic, and humorous, Smoke From This Altar is unique L'Amour writing, to be read and enjoyed again and again.
Our foremost storyteller of the American West, Louis L’Amour has thrilled a nation by chronicling the adventures of the brave men and woman who settled the frontier. There are more than three hundred million copies of his books in print around the world.