A Canticle for Leibowitz (Mass Market) 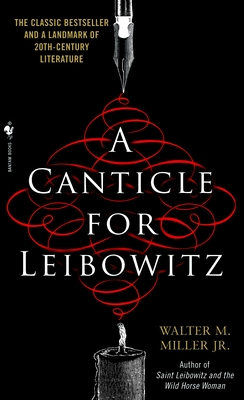 A Canticle for Leibowitz (Mass Market)


On Our Shelves Now at:
In the depths of the Utah desert, long after the Flame Deluge has scoured the earth clean, a monk of the Order of Saint Leibowitz has made a miraculous discovery: holy relics from the life of the great saint himself, including the blessed blueprint, the sacred shopping list, and the hallowed shrine of the Fallout Shelter.

In a terrifying age of darkness and decay, these artifacts could be the keys to mankind's salvation. But as the mystery at the core of this groundbreaking novel unfolds, it is the search itself—for meaning, for truth, for love—that offers hope for humanity's rebirth from the ashes.
Walter M. Miller, Jr. grew up in the American South and enlisted in the Army Air Corps a month after Pearl Harbor. He spent most of World War II as a radio operator and tail gunner, participating in more than fifty-five combat sorties, among them the controversial destruction of the Benedictine abbey at Monte Cassino, the oldest monastery in the Western world. Fifteen years later he wrote A Canticle for Leibowitz. The sequel, Saint Leibowitz and the Wild Horse Woman, followed after nearly forty years.
“Extraordinary ... chillingly effective.”— Time

“An extraordinary novel ... Prodigiously imaginative, richly comic, terrifyingly grim, profound both intellectually and morally, and, above all ... simply such a memorable story as to stay with the reader for years.”— Chicago Tribune