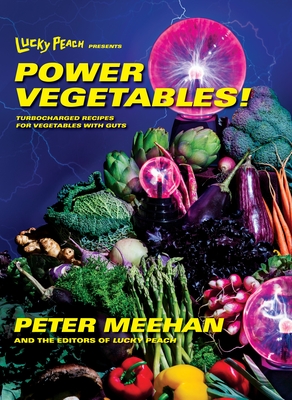 By Peter Meehan, the editors of Lucky Peach

The editors of Lucky Peach have colluded to bring you a portfolio of meat-free cooking that even carnivores can get behind. Designed to bring BIG-LEAGUE FLAVOR to your WEEKNIGHT COOKING, this collection of recipes, developed by the Lucky Peach test kitchen and chef friends, features trusted strategies for adding oomph to produce with flavors that will muscle meat out of the picture.
Lucky Peach is an award-winning independent food magazine that publishes daily on its website and quarterly as a printed journal. Lucky Peach has authored several other books, including Lucky Peach Presents 101 Easy Asian Recipes and The Wurst of Lucky Peach.

Peter Meehan is the editor and cofounder of Lucky Peach. A former columnist for the New York Times, he is also the coauthor of numerous cookbooks including the New York Times bestselling Momofuku and The Frankies Spuntino Kitchen Companion and Cooking Manual. He lives in New York.
“A vegetable cookbook like no other, in a good way.”
—The New York Times

One of “Fall's 6 Best Food Books”
—The Wall Street Journal

“As with so much of what Lucky Peach does, the balance between irreverence and utter seriousness of purpose makes this book a delight. The playful visuals and Meehan’s off-the-cuff text offer near-constant reminders that vegetables are wildly versatile, and cooking them ought to be fun.”
—Publishers Weekly, starred review

“Peter Meehan (and the editors of Lucky Peach) found a way to make a vegetable cookbook that you'll want to read as much as you want to (lick the pages) cook from.”
—Food52.com

“The indie food magazine Lucky Peach has made our dreams come true with their new cookbook Lucky Peach Presents Power Vegetables!: Turbocharged Recipes for Vegetables With Guts, in which the editors of the quarterly mag share all the best vegetable-focused dishes from our favorite chefs and restaurants—including the legendary ABC Kitchen's Squash Toast.”
—MindBodyGreen.com

“The editors of Lucky Peach, a quarterly food magazine founded by former NYT restaurant critic Peter Meehan and chef Momofuku’s David Chang, are on a mission to add a little boom boom pow to your weeknight cooking. This assortment of meat-free meals moves beyond pasta and grain bowls, putting produce front and center with help from guest contributors like Chang, Jessica Koslow of Sqirl, and Brooks Headley and Julia Goldberg of Superiority Burger.”
—InStyle

“A raucous pileup of umami-stoked veggies photographed with kitschy action figures. The recipes are easy and accessible...”
—Atlanta Journal Constitution

“Any book with an exclamation point in its title promises to be a good time, and the third book from the Lucky Peach editors doesn’t disappoint. They switch gears after their previous meat-centric cookbook with 100-plus recipes that show vegetables are anything but boring, like tempura green beans with honey mustard and bright, charred carrots.”
—TastingTable.com

“Proof that vegetables are cool: They’re getting the Lucky Peach treatment.”
—The Washington Post

“The humorous and diverse roster of recipes from top chefs including Ivan Orkin, David Chang and Jessica Koslow is made far less intimidating by witty commentary, quick Q & A’s and detailed instructions that feel as if your very talented, very cool chef friend is teaching you some cherished industry secrets.”
—PasteMagazine.com

“The idea that vegetables can make up a full, satisfying meal is no longer a novel concept... But now cooking weekday meals with this emphasis just got a whole lot easier, thanks to a new cookbook from Lucky Peach. And as its title, Lucky Peach Presents Power Vegetables!, suggests, there are no weak links or dribble-y leeks to be found here.”
—Vogue.com

“If any publication is going to make cooking vegetables fun, it’s Lucky Peach. Plus, chefs such as Ivan Orkin and Brooks Headley contributed recipes.”
—GrubStreet.com

“Lots of brightly colored graphics and photographs that are themselves mostly fun and a bit silly (one shows blue cheese dressing for a wedge salad also being poured over toy trucks and shoes), as well as recipes that one could say the same thing about: daikon with X.O. sauce, foil-wrapped vegetables, Kung Pao celeries, miso butterscotch.”
—Los Angeles Times

“Meehan and his fellow editors at Lucky Peach magazine have produced a book of entirely charismatic vegetable dishes. Readers will find the likes of Buffalo cucumbers, Tex-Mex shepherd’s pie, Sichuan squash stew, and zucchini mujadara, along with input from hotshot chefs such as David Chang and Ivan Orkin.”
—Boston Globe