The Seventh Most Important Thing (Paperback) 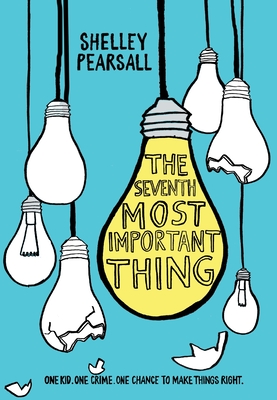 The Seventh Most Important Thing (Paperback)

By Shelley Pearsall
List Price: $8.99
Our Price: $7.99
(Save: $1.00 11%)
On Our Shelves Now at:
This “luminescent” (Kirkus Reviews) story of anger and art, loss and redemption will appeal to fans of Lisa Graff’s Lost in the Sun and Vince Vawter’s Paperboy.

NOMINATED FOR 16 STATE AWARDS!
AN ALA NOTABLE BOOK
AN ILA TEACHERS CHOICE
A KIRKUS REVIEWS BEST BOOK OF THE YEAR

Arthur T. Owens grabbed a brick and hurled it at the trash picker. Arthur had his reasons, and the brick hit the Junk Man in the arm, not the head. But none of that matters to the judge—he is ready to send Arthur to juvie forever. Amazingly, it’s the Junk Man himself who offers an alternative: 120 hours of community service . . . working for him.

Arthur is given a rickety shopping cart and a list of the Seven Most Important Things: glass bottles, foil, cardboard, pieces of wood, lightbulbs, coffee cans, and mirrors. He can’t believe it—is he really supposed to rummage through people’s trash? But it isn’t long before Arthur realizes there’s more to the Junk Man than meets the eye, and the “trash” he’s collecting is being transformed into something more precious than anyone could imagine. . . .

Inspired by the work of folk artist James Hampton, Shelley Pearsall has crafted an affecting and redemptive novel about discovering what shines within us all, even when life seems full of darkness.

“A moving exploration of how there is often so much more than meets the eye.” —Booklist, starred review

“There are so many things to love about this book. Remarkable.” —The Christian Science Monitor
A former teacher and museum historian, Shelley Pearsall is now a full-time author. Her first novel, Trouble Don’t Last, won the Scott O’Dell Award for Historical Fiction. The idea for The Seventh Most Important Thing began many years ago when she first saw outsider artist James Hampton’s amazing work. She was disappointed that so little is known about Hampton and was intrigued that his work was brought to light by anonymous sources. It was the perfect foundation for this remarkable, inspiring novel. To learn more about the author and her work, visit ShelleyPearsall.com and follow her at @ShelleyPearsall.
A NEW YORK PUBLIC LIBRARY 100 TITLES FOR READING AND SHARING
A BANK STREET BEST BOOK
A KIDS INDIE NEXT PICK
A JUNIOR LIBRARY GUILD SELECTION

“Written in a homespun style that reflects the simple components of the artwork, the story guides readers along with Arthur to an understanding of the most important things in life. Luminescent, just like the artwork it celebrates.” —Kirkus Reviews, starred review

"A moving exploration of how there is often so much more than meets the eye." —Booklist,starred review

"There are so many things to love about this book. Remarkable." —Christian Science Monitor

"...interweaves the power and purpose of art with an exploration of a boy’s grief and redemption." —The Bulletin

"Pearsall shows us that hope isn’t somewhere “out there”—it’s quite literally in our own two hands." —Jen Bryant, author of A Splash of Red: The Life and Art of Horace Pippin