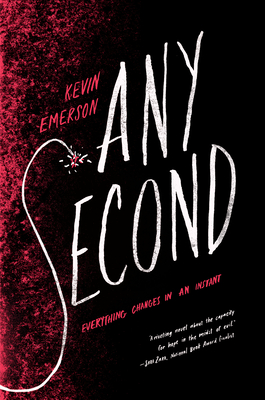 
Special Order—Subject to Availability
Marieke Nijkamp's This is Where it Ends meets Kathleen Glasgow's Girl in Pieces in a gripping novel that explores the depths of trauma and the strength it takes to rise again. Perfect for readers of Ellen Hopkins.

Five years after being kidnapped, Elian's captor sends him into the mall--with a bomb strapped to his chest.

Across the mall is Maya, a girl whose crippling anxiety holds her prisoner in its own way.

Whether it's chance or fate, Maya keeps Eli from ending them all. And now nothing is the same. Drawn together by their dark pasts, Maya and Eli know it takes only seconds for their entire worlds to change. But time will tell if meeting each other will change them for better or worse.

"A riveting novel about the capacity for hope in the midst of evil." - Sara Zarr, National Book Award finalist
Kevin Emerson is the author of numerous novels for young adults and children, including Breakout, Last Day on Mars, and the Exile series. His books have been published in ten countries. A former science teacher, Kevin is also a singer and drummer. He lives in Seattle with his wife and two children. He has won a spelling bee and lost a beauty pageant, and he once appeared in a Swedish television commercial. Visit Kevin on Twitter and Instagram at @kcemerson or on his website kevinemerson.net.
"A moving read that will keep readers up late into the night." -Kirkus Reviews

"An engrossing story of familiar pains and uncanny redemptions." -Booklist

"Emotionally and psychologically engrossing and revelatory." -The Bulletin

"Readers will be drawn into a dark and complex story that tries to answer the question, 'How can we prevent tragedies?'" –VOYA